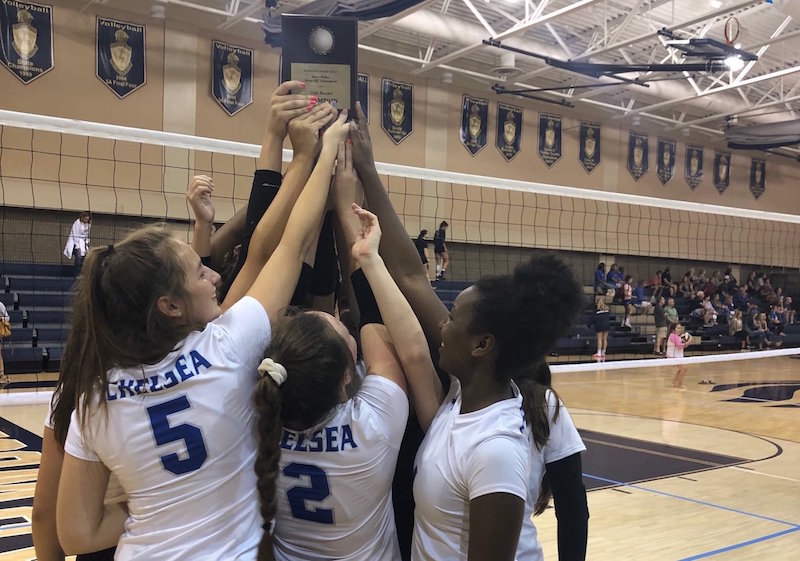 The Chelsea Hornets won the 2019 Briarwood Serve Off tournament on Saturday, Aug. 24, without dropping a set. (Contributed)

NORTH SHELBY – After starting the season with wins over Alexandria and Lawrence County in a tri-match on Thursday, Aug. 22, the Chelsea Hornets had gotten off to a strong start to the 2019 season, but it was just the beginning of a soon-to-be dominant weekend of volleyball.

On Saturday, Aug. 24, the Hornets stayed close to home when they traveled to Briarwood for the 2019 Briarwood Serve Off tournament, and not only did they finish the tournament undefeated to win the championship, but didn’t drop a set on their way to a perfect 6-0 record.

It wasn’t an easy test for Chelsea either, who took on the likes of Guntersville, Central, McAdory, Homewood, Auburn and Thompson to earn the title.

Against Guntersville, the Hornets got off to a strong start and picked up a 25-16 victory in the opening set, and while the second set ended up being a closer battle, they went on to close out match point for a 25-23 victory.

In a battle with Central, Chelsea found itself in another tight set to kick start the match, but made more big plays in the clutch to pick up a 25-23 first-set win. That seemed to kick the Hornets into gear, as they went on to win the second set 25-12 for another straight-set victory.

That was just the beginning for Chelsea, who went on to dominate the McAdory Yellow Jackets with set wins of 25-9 and 25-10.

Against a tough Class 6A opponent in Homewood, the Hornets again made easy work of the competition thanks to set wins of 25-15 and 25-17. Both sets saw the Patriots hang tough for a while, but Chelsea became too much and pounced once seeing an open window.

That led to possibly the toughest test for the Hornets ahead of the championship thanks to a matchup with Class 7A Auburn.

Chelsea, however, continued its confident play by picking up one of its most dominant victories of the day with set wins of 25-13 and 25-18 to earn a spot in the championship against the Thompson Warriors.

Thompson, who is one of the top teams in Class 7A and had a good day itself earning a spot in the championship, also struggled to keep up with the Hornets, who head coach Judy Green described as one of the best teams in the state ahead of the season.

A dominant first set score of 25-12 gave the Hornets all of the confidence they needed to pick up the championship victory. The Warriors played better in the second set, but Chelsea still did enough to pull away for a 25-17 set victory and the tournament title.