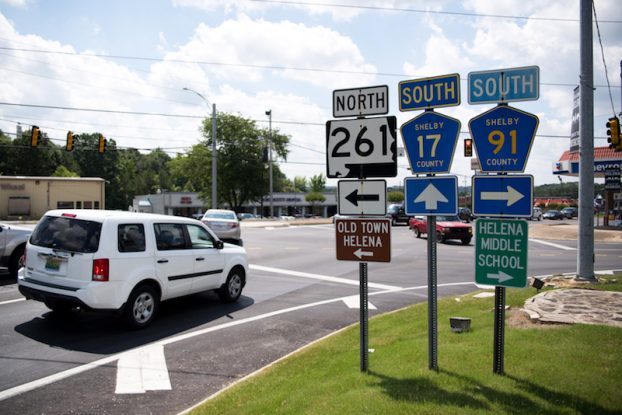 The Helena City Council approved a development agreement that will bring a Chick-Fil-A restaurant to the property of the old Helena Tire and Wheel business, seen at left. (File)

HELENA – The highly popular fast food restaurant Chick-Fil-A is expected to come to Helena after the City Council approved a development agreement at its latest council meeting on Monday, Aug. 26.

After more than a year of discussions and proposals, the Helena City Council reached an agreement with Retail Specialists, LLC to bring the future Chick-Fil-A, as well as other possible developments, to the intersection of Alabama 261 and Shelby County 52 at the former location of Helena Tire and Wheel.

Helena Mayor Mark Hall said council members addressed traffic concerns and looked at all angles of the development before entering the agreement.

“There’s actually seven acres in there zoned for retail and we wanted to get the best product in there and work on traffic as well,” Hall said. “Prior to this development agreement, the council had already approved some engineering and design work to look at adding turn lanes there. There will be traffic modifications and turn lane additions for 261 to keep the traffic moving. When this particular developer came in, they had a plan to bring first and foremost a Chick-Fil-A, and with it a road to go out the back of the property.”

Hall said the agreement reached includes the city to spend about $550,000, but that will be through sharing of taxes on three cents of the four-cent tax. One cent, which is for education, will not be touched. There will also be no sharing of property taxes, no property tax abatements and there will be permits and fees associated with building and construction.

The development should also have a positive economic impact for Helena.

“It’s one of the smallest incentives you’ll see in the metro area,” Hall said. “We envision this entire seven-acre project to not only have the Chick-Fil-A, which will generate more than $3 million in sales per year, but the other shops to come later could generate $13-20 million a year. Not to mention, it could generate approximately 50-150 new jobs.”

Once the intersection improvements are made and the developer begins developing the site, the timeline for the restaurant opening is anywhere between 12-24 months.

According to Chick-Fil-A’s website, the company operates more than 2,400 restaurants across the country in 47 states and Washington D.C., where they pride themselves on serving communities.