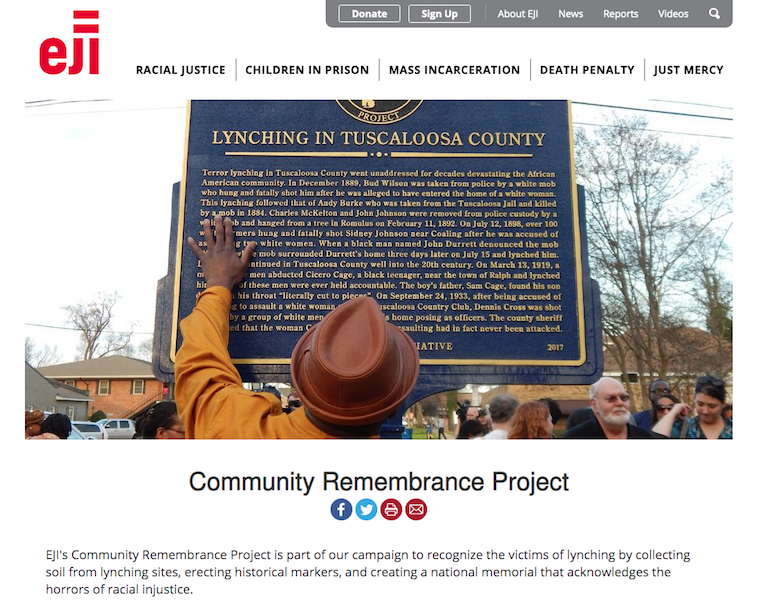 This screenshot of the Community Remembrance Project page on the Equal Justice Initiative website shows the type of historical marker the Montevallo City Council has approved for installation on city property. (Contributed/EJI.org)

MONTEVALLO – The Montevallo City Council has approved the installation of an Equal Justice Initiative historical marker on city property at the intersection of Shelby and Main streets.

In a 5-1 vote Aug. 26, the council approved the Montevallo Community Remembrance Project Coalition’s request to place a commemorative marker near the site of a double lynching of two African-American men in Montevallo in 1889.

The decision came after residents and council members voiced differing opinions regarding the marker and its intended language.

“Although we know some people aren’t happy with the outcome, it seemed that the spirit in the room was generally affirming,” said Dr. Kathy King, co-leader of the coalition, a citizen group that has been working in partnership with the EJI, a Montgomery-based non-profit law office, since last year on the project. “We hope it will lead to a deeper level of acceptance in our city and a more complex view of what our shared history looks like.”

Councilman Rusty Nix voted against the marker’s installation and location, citing concerns about the proposed language on the marker not including victims of other crimes and lynchings in the same time period.

“I agree with you that lynching is a terrible thing, it’s brutal, but so is murder,” Nix said, noting the death of John T. Lawrence, who was reportedly shot and killed during a burglary in progress in 1889. “Where is the equal justice for him?”

King said the marker does not tell the whole story of the events that occurred on Aug. 31, 1889, but “recounts one story of many – the story of the failure of our laws, our officials and our criminal justice system to protect two of our African-American citizens.”

“The issue is they never had the opportunity to go to trial,” Mayor Hollie Cost said of the men. “It’s not whether these people were guilty or innocent. This is a historical report to acknowledge what happened and to start the healing process. It is our shared history, but it belongs especially to our African-American brothers and sisters.”

Resident Charlie Binion said information about the proposed marker and its language were not as accessible to the public as they should have been, and that citizens did not have enough time to hear and speak about the matter before the council voted on it during the meeting.

“There is a lot of resentment in the community about this,” Binion said. “I suggest you consider making some way to let everybody say what they want to say.”

Resident Janice Seaman said some of the names and information the coalition has provided to the EJI for the marker are inaccurate.

“If we’re giving things to the EJI, we would at least like that information to be correct,” Seaman said.

Dr. Paul Mahaffey, coalition co-leader with King and Dr. Sierra Turner, said Montevallo will be one of only six cities in Alabama, and the 17th city in the nation, to install an EJI marker.

Dr. John Stewart III, president of the University of Montevallo, voiced his support of what he described as a “noble project.”

“I have read some respectful emails and opinions on why it might be dredging up pain from the past, (but) I do think we need to remember,” Stewart said. “We need to remember that history and make sure it never, ever happens again.”

King said the next step in the installation process is the Historical Marker Dedication and Unveiling Ceremony, which could take place as early as November.