HOOVER – An armed victim turned a potential robbery into an arrest by Hoover police on Tuesday, Aug. 27. 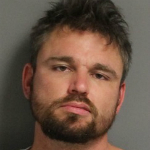 Police responded to 22 Inverness Center Parkway at 5:57 a.m. on Aug. 27 on a report of a robbery in progress.

The victim told police dispatchers he encountered a male suspect inside of his work truck and was holding him at gunpoint, according to a news release from the Hoover Police Department.

Officers arrived on the scene and took the suspect into custody without incident.

He was identified through fingerprints as William Victor Shadden, 33, of Cullman, after initially giving police a false identity, according to the release.

After he was positively identified, officers discovered the suspect had two outstanding warrants for his arrest, including one for breaking into a vehicle in Jefferson County.

“The victim told officers he opened the rear passenger door of his work truck and was startled by a male sitting in the front passenger seat,” the release stated. “He was armed with a knife and demanded the victim give him money and keys to the vehicle. After tossing the keys toward the suspect, the victim pulled his concealed carry firearm, and the male dropped the knife. Several of the victim’s coworkers witnessed the incident and assisted in detaining the suspect until police arrived.”

Shadden was set to be transferred from the Hoover City Jail to the Shelby County Jail, where he will be held on bonds totaling $25,000.