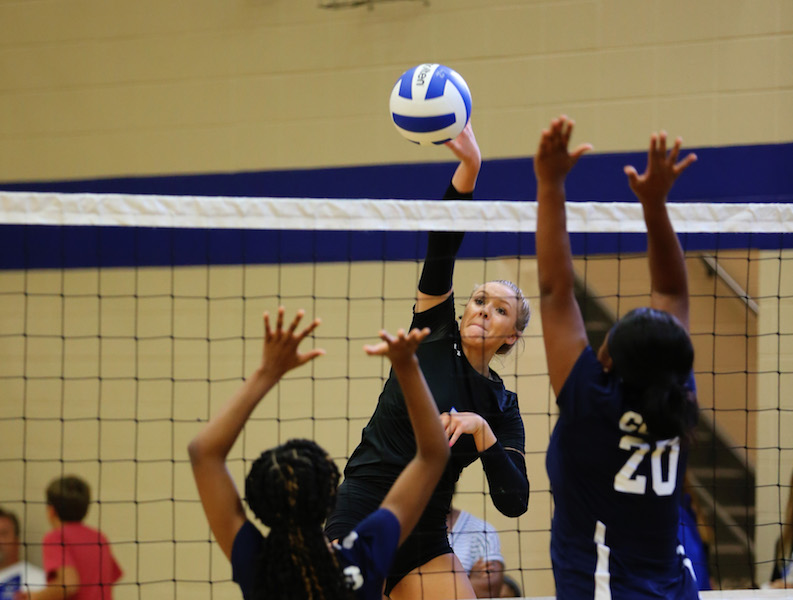 The Chelsea Hornets put together another strong performance on Tuesday, Aug. 27, to win their eighth and ninth consecutive matches in straight sets. (For the Reporter/Robert Dean)

CHELSEA – The Chelsea Hornets remained undefeated on Tuesday, Aug. 27, thanks to a tri-match sweep featuring victories against Clay-Chalkville and Oxford in their first home action of the 2019 volleyball season.

During the two matches, the Hornets failed to drop a set, marking the ninth consecutive match they haven’t dropped a match. In Chelsea’s opener of the 2019 season, the Hornets dropped one set to Alexandria, but have since won nine in a row without dropping a set, including seven in a row at the Briarwood Serve Off tournament to earn the team’s first championship of the season.

In their most recent success, the Hornets picked up 2-0 straight-set victories against both Clay-Chalkville and Oxford with the closest sets being two 12-point sets against Clay.

In the opening set against the Cougars, Chelsea was able to grab an early lead and never looked back. While Clay-Chalkville made a couple of short runs to try and gain some momentum, it was never sustained as the Hornets eventually pulled away for a 25-13 first-set victory.

That set the tone for the match as the Cougars never could come up with an answer for Chelsea’s strong service game, great defense and impressive play at the net.

With the Hornets’ consistency, they went on to take a quick advantage in the second set, and again, the Cougars were unable to sustain any lengthy run, which led to Chelsea taking the second set 25-13 to pick up a straight-set victory.

The Hornets were led by Amaya Rudolph with 10 kills in the match, while Zoe LaBreche and Hope Wright each added five kills. LaBreche also led the team with two aces, while Victoria Schmer posted 16 digs to lead the team. Bailey Drew McIntyre added a team-high 22 assists in the winning effort.

Chelsea’s confidence was already soaring before that with seven consecutive straight-set victories, but grew even more with that eight sweep in a row heading into the second match of the tri-match with Oxford.

The Yellow Jackets, who were averaging below 20 points per set this season coming into the match struggled to keep up with the Hornets, who average 24.4 points in the first set and a perfect 25 in the second and 15 in the third to this point in the season.

Chelsea flashed that advantage in the opening set that was never close, eventually going on a lengthy run to pull away for an easy 25-11 win in the set.

One set away from a ninth straight sweep, the Hornets’ confidence was at a high and led to easy work in the final set with Oxford faced with the pressure of having to win to stay alive.

Rudolph and Wright tied for a team-high seven kills in the match, while LaBreche added four more kills. Schmer and Anna Sartin had two aces apiece, while Schmer led the team with 10 digs in a balanced effort that saw five players with four or more digs. McIntyre again led the team with 19 assists.

With the dominant second-set victory, the Hornets picked up a ninth consecutive straight-set victory to remain perfect on the season at 10-0.