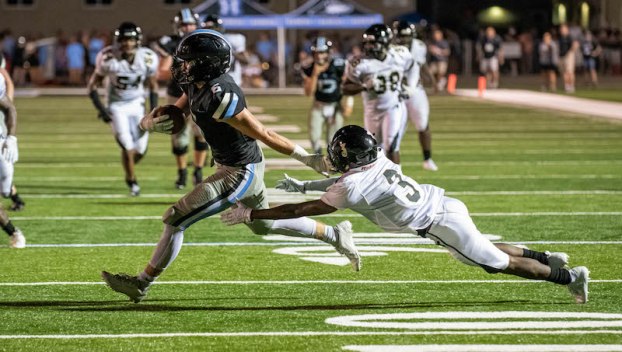 Helena will travel to No. 5 Hueytown on Thursday, Aug. 29, for our Game of the Week. (For the Reporter/Neal Wagner)

The satisfaction of week one was more than we could have imagined with several teams picking up statement wins, but now we’re on to week two, which not only has several exciting matchups, including three Thursday night games, but also marks the last week before region play kicks off.

With region play just a week away, the focus shifts away from the giddiness of football being back to being focused on the necessary adjustments to turn into a championship-contending team.

This week we’ll see a lot of out of classification matchups, but we’ll also learn a lot about what each team has with two weeks in the books. Below we pick all 10 of this week’s games, including our Game of the Week featuring the Helena Huskies.

Game of the week: Helena at Hueytown (Thursday)

The first week of the season offered a chance for Helena to prove it could back up the hype and take the next step forward in the program, but the second week offers a chance to prove the Huskies are a legitimate championship threat with a matchup against No. 5 Hueytown. The interesting aspect of this game will be the stellar ground game for each team.

Hueytown is coming off a 32-19 victory against Homewood in which Alabama commit Roydell Williams had 150 rushing yards and three touchdowns, while adding 57 yards receiving. The Huskies are coming off a 38-14 victory over McAdory in which they ran for 287 yards, 160 of which came from Marquise Johnson with two touchdowns. With one of the best offensive lines and defenses this season, the Huskies are in good shape moving forward, but this may end up being their most difficult game. While I think the Huskies have an advantage in the trenches on both sides that could lead to a win, the Golden Gophers’ efficiency may be tough to match. This one is a coin flip. Helena 20, Hueytown 24

These two teams are coming into this game in completely different situations. The Warriors showed people they are still for real with a 40-14 victory over Davidson with 30 points in the first quarter and four touchdowns from quarterback Sawyer Pate, while Foley lost its opener 39-0 to Prattville. Thompson already had confidence, but now some young players have experience on defense, and the offense will always move the ball. That combination spells success for the second week in a row, but the Warriors can’t look ahead to Hoover the week after. Thompson 42, Foley 7

Spain Park couldn’t have asked for a better start to 2019 thanks to the offense racking up 600-plus yards behind quarterback Harrison Barker’s 488 passing yards in a 42-33 victory over Hillcrest-Tuscaloosa. While the defense struggled at times, they showed some promising signs with new guys and will continue to get better, while the offense showed us exactly what we needed to see. The Jags will go into this matchup with redemption on their mind after last year’s heartbreaking 16-14 loss, and I think the Jags’ offense will continue to roll in a fast start. Spain Park 28, Bessemer City 14

This rivalry matchup will have many intriguing storylines. Chelsea is coming in off a 17-0 loss to Oak Mountain, while Briarwood enters the Matthew Forester era after its first coaching change in 30 years. In week one, the Hornets’ offense struggled to move the ball like it did early last year, which doesn’t bode well for a matchup with Briarwood, who always has one of the state’s best defenses. That being said, there is a lot of unknown surrounding the Lions, while Chelsea knows what it needs to do to win now. Until I see Chelsea’s offense take a step forward, it’s hard to see the Hornets winning, but the defenses should keep this one close and at least give them a chance. Briarwood 20, Chelsea 13

The Eagles couldn’t have asked for a better start to the 2019 season thanks to a 27-20 victory over Pelham. Calera built a 27-0 lead at the half and allowed the Panthers to come back, but that doesn’t diminish how well the Eagles played. They looked so fast and athletic, and while depth concerns me, you can tell this team is inspired and different than last year’s 1-9 team. While they lost to Pell City 27-7 last year, this year’s team is improved and Pell City has taken a slight step backward after an opening-night loss to Fort Payne. Calera will have to come out and build a lead again with depth playing a concern in the second half, but if the Eagles believe they can do it, they’ll win this one. Calera 28, Pell City 24

Pelham is the better team in this matchup. Simple as that. The Panthers, however, can’t sulk from last week’s difficult opening loss to Calera. Instead, they have to build off of the incredible comeback attempt that saw them have a chance to tie in the final minutes after falling behind 27-0. If they can use what they did in the second half of that game on both sides of the ball and carry it into this week, this one shouldn’t even be close. I think Pelham gained a lot of confidence in that second half, while Bibb County squeaked by a Class 4A team 8-6. Pelham 28, Bibb County 7

This game has quickly become extremely important for both teams with the winner avoiding a 0-2 start. The Wildcats lost their opener 22-14 after being in a 14-14 game with less than five minutes to play, while the Bulldogs lost 48-14 to a Marbury team they beat 36-27 last year. Shelby County is an improved football team this year and a classification higher, while Montevallo has to prove it’s a better team than we saw last week. It should be a close game, and the Wildcats may hold a physicality edge, but I need to see their secondary be able to stop Montevallo’s passing attack. Montevallo 28, Shelby County 21

Vincent’s opener may not have looked pretty in the score column thanks to a 42-14 loss to White Plains, but there were some positive signs against a team two classifications higher. Now the Jackets get an advantage playing a 1A team that is coming off a 20-18 loss. Vincent needs this game badly and should win it. While it’s hard to predict and know what to expect from the Yellow Jackets this week, we’ll be able to learn a lot about their season in how they perform. Vincent 28, Keith 14

While Bessemer Academy is coming off two consecutive losses of 47-6 and 48-6, this still marks one of the most difficult games for Evangel, who is coming off an 18-6 win over Pickens Academy to start the season. Both losses for the Rebels were to extremely talented teams, while the Lightning are playing their second 11-man team in a row. I expect it to be closer than last year’s 48-20 game, but it will be tough for ECS to pick up the win. Evangel 24, Bessemer Academy 35

By CHRIS MEGGINSON | For the Reporter ANNISTON – Vincent traveled into Calhoun County Friday night to take on the... read more