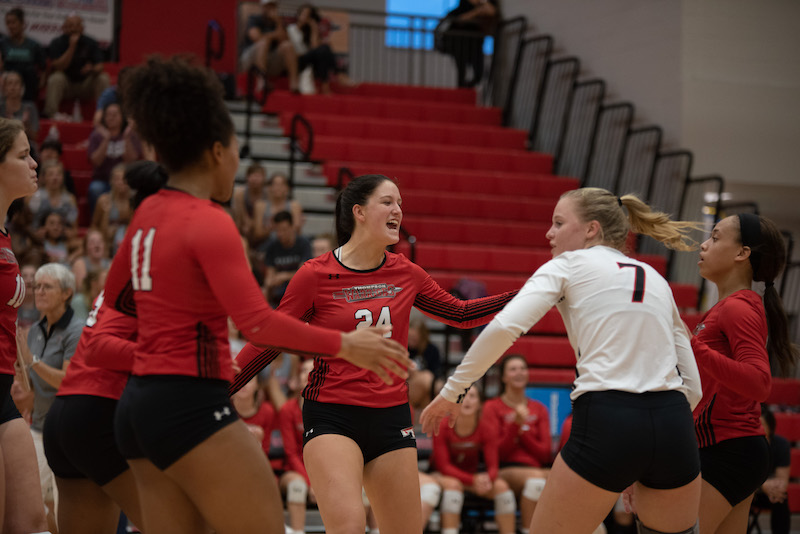 The Thompson Warriors upset No. 1 Mountain Brook on Tuesday, Aug. 27, thanks to a strong 15-4 win in a decisive third set. (Reporter photo/Keith McCoy)

ALABASTER – It was another night to remember in Warrior Arena as sixth ranked Thompson hosted Auburn and the top ranked Spartans of Mountain Brook Tuesday, August 27.

The Spartans (8-3) were coming off their first win in the Juanita Boddie Tournament in school history, while the Warriors (8-2) had fallen to Chelsea in the Briarwood Serve-Off Tournament over the weekend, but Thompson put together a bold strategy and took down the Spartans in three sets 25-18, 21-25, 15-4.

The Warriors put away a pesky Auburn Tigers team first. Thompson slowly built a 16-9 lead in the first set, but Auburn climbed back in it and pulled to within one point at 21-20.

Four straight points from the Warriors, including an emphatic kill from Sophie Bearden quieted the threat, but the Tigers charged hard again in the second set.

Auburn built a lead as big as four points and led for the majority of the set. Down 20-17, the Warriors took eight of the next 10 points featuring kills from Bearden and Jada White. Kolbi Reed paced Thompson with 11 kills in the two sets while Bearden collected eight.

Despite the win, head coach Judy Green wasn’t satisfied with the performance.

“I felt like we were playing too cautious in the Auburn match,” Green said. “We were just too conservative we weren’t trying to produce points.”

Green confronted her team in the locker room afterward.

With a new mission in mind, the Warriors hit the court again after Mountain Brook made short work of a tired Auburn squad.

The first set was a game of runs and the Warriors struck first building an 8-3 lead. The Spartans reeled off an identical run to tie the set at 11, but Thompson outscored them the rest of the way 14-7, including two more service aces and kills from Bearden, White and Reed.

The aggressive approach suffered a setback in the second set as 10 errors and four service errors gave Mountain Brook a boost. Reed had her best set in the midst of the chaos sending three aces across the net along with another three kills.

“It was two complete matches for her, she passed well, she attacked the ball well and made really good shot selections I felt like,” Green said. “She took what the block and the defense gave her and she played extraordinarily well.”

Despite the errors, Thompson still drew to within 20-19 and had a chance to sweep, but Mountain Brook responded with four kills to extend the match.

Still, it was obvious the Warriors’ relentless effort was wearing on the top ranked Spartans—and it showed in the deciding set.

“We have a lot of respect for their volleyball program, their program has been very successful and we knew that we were going to have to serve aggressively to keep them out of rhythm, but I think at the end of the day we had a good mindset and I thought we played incredible defense and served really well.”

Both stood out in the final set as White came up big with blocks time and again, frustrating the Spartan front line.

“Jada reminds me of a girl that played for me at Alabama named Crystal Hudson,” Green said. “Crystal was the best athlete I’ve ever coached in my life. Jada has really good lateral speed which makes her a good blocker who can close blocks on the outside pins. She helped our team find some identity tonight.”

Kinsleigh Sabo keyed the defense as well fighting off shot after shot from Mountain Brook.

“She was ready to be the best libero on the court,” Green said. “I feel like she impacts our team in so many different ways. It’s her energy, her ability to get to tough balls and pass free balls that our hitters don’t have to mess with.”

Thompson quickly built a 7-3 lead and nearly took an 8-3 lead, but Reed’s attempt at the net sailed on her and out of bounds. That was the final chance for the Spartans as she bounced back for a kill two points later and the Warriors took all eight of the final points to leave no doubt in a stunning 15-4 close out.

Green praised the overall team effort from her girls.

“Riley Parker gave us some dynamite points from the service line,” Green said. “She really helped us keep our momentum and Kelsey Tangle set a beautiful match for us tonight and she continues to grow as a setter who is now running the offense.”

The big win sets the stage for a busy week for the Warriors. They host Calera Wednesday, Shelby County on Thursday and will travel to Montgomery for the Mayor’s Cup Tournament Friday and Saturday. The schedule will strain the team, but Coach Green says that was intentional.

“If you never experience what it’s like to have to grind through that schedule you won’t be prepared for it at the end of the season,” said Green. “And that’s what this week is giving us the opportunity to do.”