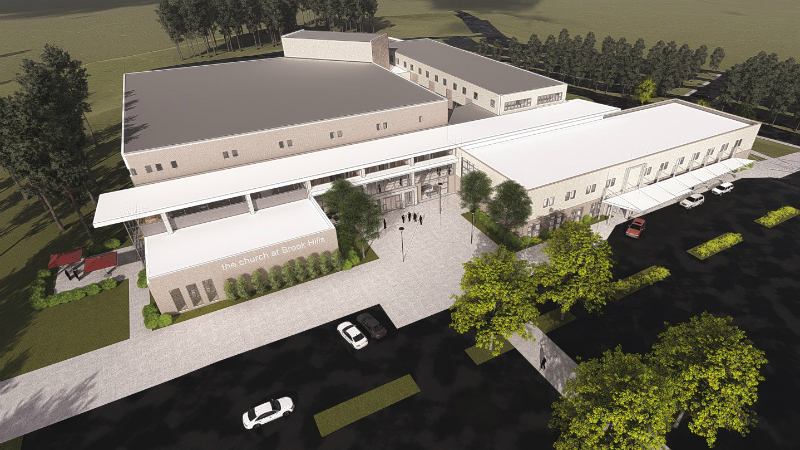 A campus development project at The Church at Brook Hills will yield a new lobby and commons area, a ministries building, additional parking and more. (CONTRIBUTED)

HOOVER – Work has begun on construction projects that will help The Church at Brook Hills continue to meet the needs of its members and the community.

The campus development plan at Brook Hills has been in the works for about three years, Executive Pastor Dennis Blythe said, when church leaders began discussing the need for new space.

A formal plan was presented to the church for a vote in fall 2018.

“The church voted overwhelmingly to move forward with the project so we felt good about that,” Blythe said.

The plan has four components: a permanent lobby and commons area, a two-story ministries building, additional parking and addressing a collection of deferred maintenance projects.

The new construction would connect to the church’s main building, located at 3145 Brook Highland Parkway, where what were intended to be temporary walls and a roof form the current lobby.

The commons area will be a gathering space with enough versatility to be used to host meals.

More than 150 such groups meet at the church and off-campus, with many of them formerly housed in temporary modular buildings.

Blythe said one of the church’s values is for children being able to both worship with their families and participate in age-appropriate small groups of their own, thus necessitating the provision of on-campus small group space for children and adults.

A new parking lot with 257 spaces will replace and expand on a lot that was also built to serve temporarily and which was beginning to suffer from potholes and drainage issues.

The list of deferred maintenance issues to be addressed through the campus development plan include a new roof, new carpet in the worship center and upgrades to the heating and air system.

“These are big ticket items that we deferred and decided to roll into the cost of this larger project with the hope that we could save some dollars,” Blythe said.

The total cost of the work will be about $14 million, Blythe said. Site prep work is underway, and the project is expected to be completed in fall 2020.

LIVE Design Group is the architect for the project, and JohnsonKreis Construction is the general contractor. Both companies have high-ranking officials who attend Brook Hills and have assisted with other projects, Blythe said.

The project will create a new north entrance that “will feel like the front door,” Blythe said, though many attendees will continue to use an entrance on the opposite end.

So, gifts through Roots & Reach will be split between the construction project and a series of missions projects, the first of which is a Bible translation effort for the unreached Baloch people of Central Asia.

“In Brook Hills’ DNA is a commitment to global and local missions,” Blythe said.

The first facility on the property now houses student ministries, and the current building was completed in January 1999.