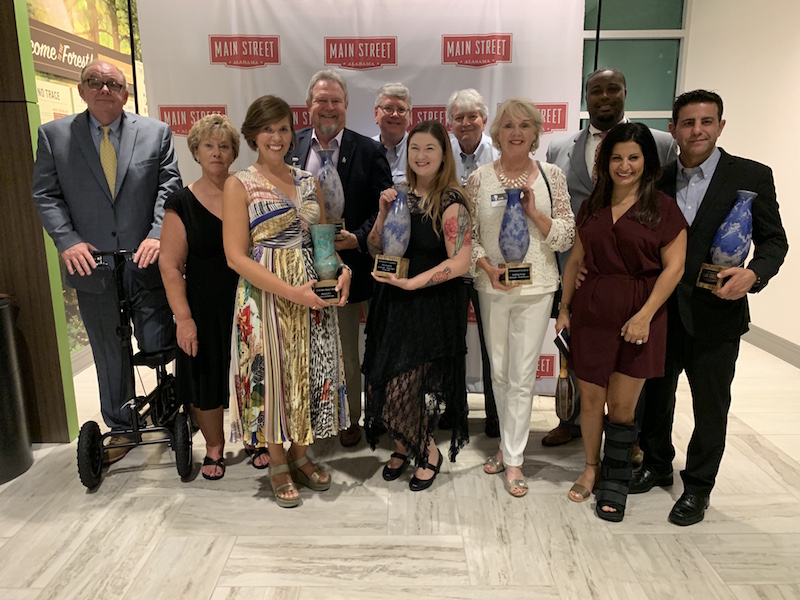 Representatives from Montevallo hold the awards the city received at this year's Main Street Alabama Awards of Excellence banquet in Decatur. (Contributed)

DECATUR, Ala. ­– Montevallo was honored with five Main Street Alabama Awards of Excellence at a banquet this month.

Montevallo’s representatives were among nearly 150 community leaders from Alabama, along with attendees from Kentucky and Tennessee, who attended the sixth-annual event as part of the aLABama Downtown Laboratory three-day conference for current and potential Main Street program communities focused on downtown revitalization efforts.

“We were pretty impressed with all the recognition we received,” City Clerk and Treasurer Herman Lehman said.

Main Street Alabama focuses on bringing jobs, dollars and people back to Alabama’s historic communities through downtown and neighborhood commercial districts, according to the press release.

More than 200 projects, people and entities were nominated by their local Main Street programs to be recognized for the impact they make in their communities.

“We have a lot to celebrate,” Mayor Hollie Cost said, adding Montevallo is also ranked the 11th safest city in the state.

During the Awards of Excellence program, Main Street Alabama’s President and State Coordinator, Mary Helmer, honored projects and individuals that made tremendous impacts in their respective communities.

“As our program grows, we continue to encourage our local communities to pursue and demand excellence for their districts and strive to create places that are authentic and welcoming to entrepreneurs,” she said. “Projects recognized with an Award of Excellence are truly charting new territory in downtown revitalization in Alabama. The effort and leadership it takes to move these projects from concept through completion is tremendous and we are thrilled to acknowledge such achievements. We are especially honored to be presenting these awards the day Governor (Kay) Ivey proclaimed Main Street Alabama Day.”

Alabama Municipal Electric Authority sponsored the event, which was held at the Cook Museum of Natural Science in Decatur.