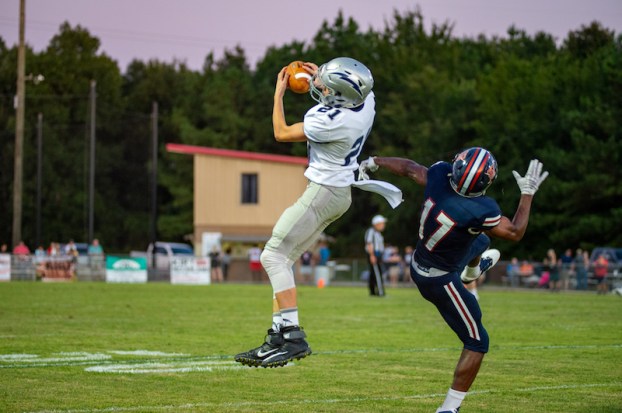 The Evangel Lightning fell to 1-1 on the season with a difficult loss to AISA Bessemer Academy on Thursday, Aug. 29. (For the Reporter/Larry Dancy)

After falling behind 13-0, Jeff Lodge blocked the extra point to set up the Lightning’s first scoring drive. Tyler Henderson carved up the Rebels’ secondary. He capped the drive with a 7-yard touchdown to Will Ferrell, one of four catches and 34 yards for the junior receiver. Carson Hendon caught a slant route to convert the 2-point conversion, 13-8.

“It was one of the most impressive drives we’ve had since I’ve been here,” Smith said. “We’re down 13-0 to a really good football team and our kids didn’t panic. We took the football and threw it all over the yard. We had people wide open at times. Tyler was hitting everyone.”

After another quick TD by Bessemer, ECS responded with a 59-yard touchdown pass from Henderson to Hendon. The 2-point try failed, making it 21-14 in the first quarter.

Bessemer Academy then went on a roll, score three more touchdowns before the half to take a 42-14 lead into halftime. The Rebels tacked on their final touchdown late in the fourth quarter.

Henderson was 10-of-18 passing for 186 yards, two touchdowns and one interception, accounting for all of ECS’s offense by air. The Lightning did not have any positive rushing yards.

“We knew we were going to have to throw it against them because they are so big up front,” Smith said.

Lodge had 37 yards receiving on two catches and five tackles to join Ferrell and Hendon. Jahmad Quillman led the defense with six stops.

ECS (1-1) will mix things up next week, hosting Ezell-Harding Christian School for the Lightning’s first 8-man football game of the season on Friday, Sept. 6 at 7 p.m. It’s the first of two 8-man games before traveling to AISA teams Edgewood Academy and Meadowview Christian in late September.

By ALEC ETHEREDGE | Sports Editor It’s been a strong start locally to the 2019 volleyball season for several teams,... read more