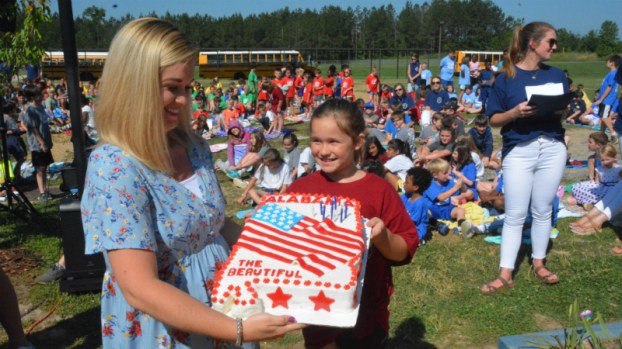 A birthday cake marking the Alabama Bicentennial was presented at a special celebration at Chelsea Park Elementary School in May. (FILE)

The announcement was made at the Alabama Department of Archives and History, where Ivey was joined by superintendents, principals and teachers from the selected schools, along with legislators and other dignitaries from across the state.

Launched by Ivey in December 2017, the Alabama Bicentennial Schools Initiative encouraged all public, private and homeschool students and teachers to participate in the celebration of Alabama’s 200th anniversary of statehood.

In early 2018, all Alabama schools were invited to submit proposals for community service and engagement projects connecting classrooms with their local communities. In August 2018, 200 schools were selected as official Alabama Bicentennial Schools and received $2,000 grants to support the implementation of their projects.

“As Alabama nears 200 years of statehood, it is important to engage our students. After all, our students are the future of our state and the ones who will lead generations to come into the next 200 years and beyond,” Ivey said. “I am proud to award grants to 21 schools to carry out their community service and engagement projects. This is an exciting time for our state, and I am glad to see our young people taking initiative.”

Over the last year, Bicentennial Schools in every corner of the state developed projects that made meaningful contributions to their local communities. Ranging from oral history projects to community gardens to mentorship programs, these projects fostered new relationships between schools, students and local citizens that will extend well beyond Alabama’s bicentennial celebration.

Alabama’s 200 Bicentennial Schools submitted their final reports in August 2019. Community leaders from across the state served on committees tasked with evaluating each project and selecting 21 schools, three from each congressional district, to receive the additional designation of Alabama Bicentennial School of Excellence.

In addition to receiving the Governor’s Award grants, the Schools of Excellence will be invited to participate in commemoration ceremonies in Montgomery on Dec. 14, the culmination of Alabama’s bicentennial.

“The 21 Alabama Bicentennial Schools Excellence embraced the spirit of the bicentennial in inspiring ways,” said Steve Murray, director of the ADAH and co-chair of the Bicentennial Education Committee. “The combination of innovation, hard work, and community service seen in these projects serves as a model for building a bright future in Alabama’s third century.”

The Alabama Bicentennial Schools of Excellence include: