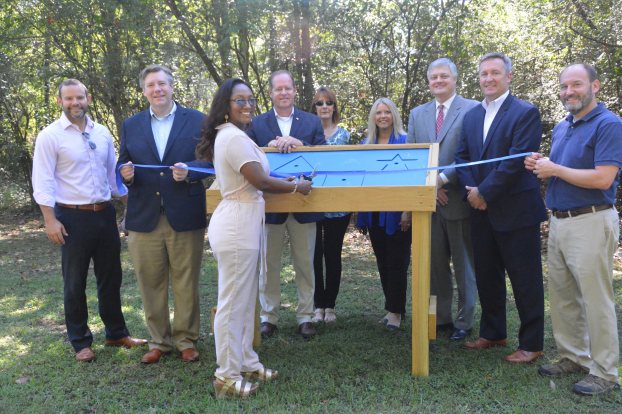 Angel Warriors Foundation founder Jamia Alexander-Williams cuts the ribbon for the city’s Sensory Trail, which will be located at Buck Creek Park. The project is expected to be completed by November. (Reporter photo/Briana H. Wilson)

Williams said this project is important because there isn’t currently a place in Shelby County for these individuals to enjoy. It is vital that individuals with special needs and multiple disabilities feel like they are included in the community and can take part in activities like typical individuals, Williams added.

The trail will include a giant wind chime, a shapes station, a planter for seasonal herbs, a rock climbing wall, a music wall and several other interaction stations. Williams expects all the stations, which will be wheelchair accessible, to be placed on the trail by November.

“This project means more to me and the Angel Warriors Foundation than you all will ever know,” Williams said. “Thank you for making this dream come true. This will benefit not only our community, but the entire Shelby County community.”

The project is being funded in part by a $5,000 grant from Cawaco, non-profit agency dedicated to the enjoyment, education, enhancement and protection of natural resources.

“This project was brought to our attention by Sen. Cam Ward,” said Drayton Cosby with Cawaco. “We rely on our state legislators to help us locate projects like this that we can help with.”

Weaver said the city of Alabaster is lucky to have Williams because she is an asset to the community.

“Turning dreams into reality is what Jamia does,” Fridy added. “I’m just excited to be a part of it.”