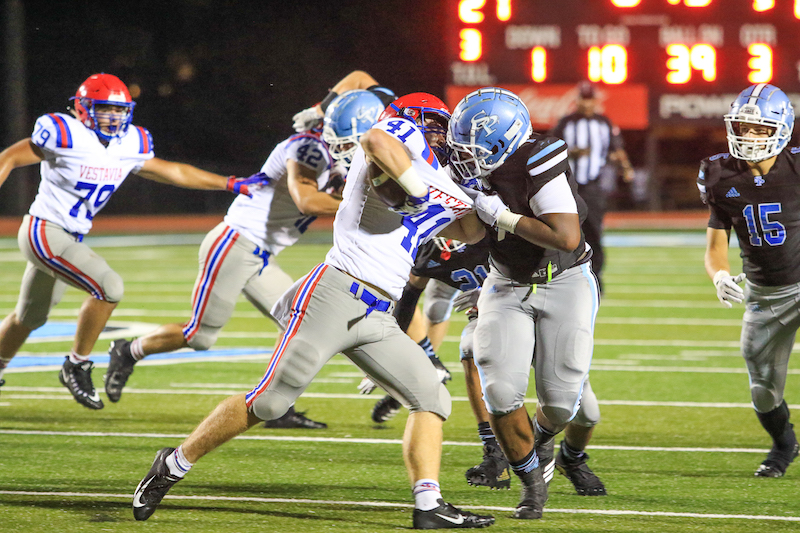 Region play will kick off this week for all county teams, including a crucial matchup for Spain Park as the Jags travel to Vestavia Hills on Friday night. (File)

While two weeks of the 2019 football season are in the books, it truly begins this Friday, Sept. 6, with region play beginning for county teams.

The summer preparation and first two weeks of the new season have all been leading up to this, as teams look to begin a trek to the playoffs, and there is no shortage of great games.

With a matchup that has become an instant rivalry over the last two years between Thompson and Hoover, which has its own prediction story, as well as four other games that were decided by 10 points or less last year, it’s sure to be an exciting week as team’s look to get off to an important 1-0 start in region play.

This game is not only extremely important for Spain Park, but is set up to be an offensive showdown. The Rebels are coming off a 49-7 win over Homewood where the offense looked unstoppable, while the Jags have scored 77 points through two games. Last year, the Jags lost by 10 points or less in this game and the game that follows against Mountain Brook, which kept them out of the playoffs. This game, in my opinion, could be the game that determines their fate yet again. Spain Park is coming off another difficult loss to Bessemer City for the second year in a row, but the offense has shown it can make plays. I expect a high-scoring affair in this one, but the Rebels have a bit more confidence after last week, while Spain Park’s defense has struggled and needs to find success quickly. Spain Park 21, Vestavia Hills 35

This is another game that could be high scoring after last year’s matchup saw a combined 99 points in a 52-47 win for Hewitt-Trussville. This year, the Eagles’ offense looks to be in similar shape, while the Huskies’ defense has given up 52 points through two weeks. Oak Mountain has also had a bye week to fine tune its option attack, while Hewitt has just a week to work on it. I also think Oak Mountain’s defense is playing well early in the season. Hewitt is probably the more talented team and should win, but everything adds up for Oak Mountain to at least have a chance again this year. Oak Mountain 28, Hewitt-Trussville 38

Last year, it took Chelsea nine weeks to win its first game, but this year just two weeks thanks to an upset of Class 5A No. 1 Briarwood in week two. The Hornets are in a perfect spot in this game taking on a 0-2 Carver-Birmingham team. Carver’s defense has struggled giving up a combined 57 points through two weeks, which will help the Chelsea offense. And while Carver’s offense has been on fire, the strong suit of Chelsea’s team is defense. Last year, this was a four-point loss for the Hornets, but after proving they could win a close game last week against Briarwood, I think they have the confidence to do it again this week. The offense still needs to take steps forward, but Chelsea sits in a good situation this week. Chelsea 24, Carver 21

Calera has played two great first halves in a row, but has gone on to be outscored 33-0 in the second half through the first two games. The Eagles held on to win their opener 27-20 over Pelham, but dropped one last week to Pell City 27-21. I think the Eagles are vastly improved from last year and will keep this game much closer than the 34-13 loss a year ago, but Wetumpka is always one of the better teams, and Calera needs to prove it can finish a second half. Calera 21, Wetumpka 31

Heading into the season, I’m not sure either of these teams expected a 0-2 start, but here we are. Pelham is coming off losses to Calera and Bibb County by a combined nine points, while Homewood has lost to No. 5 Hueytown and Class 7A Vestavia Hills. The competition has been tougher for Homewood, but Pelham has shown it’s a team that won’t quit. The Panthers want this game badly, but they’ll have to prove they can actually make the plays late, and they’ll also have to get off to a much faster start. Pelham 21, Homewood 28

There’s no time for Briarwood to sulk following last week’s difficult 17-14 loss to Chelsea to open the Matthew Forester era. And to be honest with you, there is no reason the Lions should sulk. They looked like the better team on both sides of the ball in the second half, but made poor decisions and had costly penalties. It’s a team that could have easily won, and if those mistakes are corrected this week, they should be able to win this one. Pleasant Grove is an extremely talented team at 2-0 with wins over Mortimer Jordan and West Blocton, but honestly, Briarwood looks improved this year to me despite the opening loss. The defense was outstanding for all but one drive against Chelsea, and the offense moved the ball well against a great defense in the second half. It’s going to be tough against a good defense, but it’s a team that should be able to pick up a big region win at home if they’ve focused on the right things during practice leading up to the game. Briarwood 17, Pleasant Grove 14

It’s hard to say a season relies on a win in week three, but with both of these teams now 0-2, it feels like a win is a must. Shelby County has looked good offensively early in the season, but the defense is struggling. Chilton County has played two good teams in Stanhope Elmore and Sylacauga, but won this game 34-0 last year and is 41-24-1 all-time in the series. I think the Wildcats’ offense will keep them in it, but need to see the defense step up to make a play to win a game before I can pick them. Shelby County 21, Chilton County 35

After a tough week-one loss where the offense struggled, Montevallo bounced back against Shelby County with a 56-50 win and looked like the state’s best offense. That’s what we expected to see this year. Dallas County is coming off a 58-0 loss to McAdory, which doesn’t say much against a good 6A team, but the Bulldogs won this game 41-0 last year. With Montevallo finally getting some offensive rhythm, I can’t see Dallas County making up that big of a gap. Montevallo’s defense will have to get better moving forward though. Montevallo 40, Dallas County 14

The Yellow Jackets are now 0-2 after a difficult 28-19 loss to Keith. They have scored first in both games this year, but haven’t been able to continue that success moving forward. LaFayette is coming off a 17-0 loss to Lanett, but it’s a Lanett team that used to rule this region. LaFayette won last year’s matchup 40-0 and is the better team in this one. Right now, it’s all about gaining confidence for Vincent. Vincent 13, LaFayette 35

Cornerstone is off to a 0-2 start, but looked improved in a 35-20 loss to Springwood last week. Crenshaw, however, is one of the toughest teams on the schedule this year and is coming off a big win over Pike Liberal Arts to start the season 1-0. The Chargers may not be able to pull off the upset, but they can continue progressing in the right direction this week. Cornerstone 13, Crenshaw 35

This will be an interesting matchup for the Lightning. The king of eight-man football in Alabama, Evangel will take on a former 11-man team from Tennessee in Ezell-Harding that is just now moving down to eight-man competition. Ezell-Harding has scored 60 points or more in three straight games to open the season, while Evangel has an incredible offense as well. I’ll lean with the hometown team, but expect a high-scoring affair. Evangel 56, Ezell-Harding 49