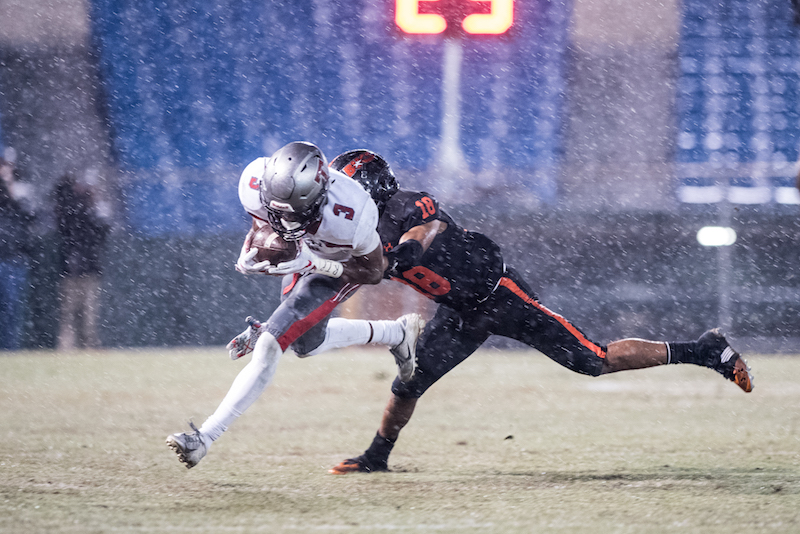 The Thompson Warriors and Hoover Buccaneers will meet for the third consecutive year as two top five teams during the first week of region play. (File)

Thompson vs. Hoover (Game of the Week)

For the fifth straight meeting, these two teams will be ranked inside the top five of the Class 7A standings. It’s a game that features teams that have played for the last two championships, and over the last two years, the Warriors and Bucs are 2-2 against each other.

Before that, Hoover was 14-0. Thompson won for the first time in school history during the regular season two years ago, then Hoover got redemption in the semifinals of the playoffs to punch a ticket to the state title game.

Last year, it was the opposite as Hoover won in the regular season, and Thompson came back to win in the semifinals to advance to the state title game.

Now, the two are set for another must-see matchup. Both teams are undefeated as the No. 1 Bucs travel to Warriors Stadium for the first time to take on No. 4 Thompson.

Through two weeks Thompson has outscored Davidson and Foley by a combined 82-27. Hoover, on the other hand, has faced tougher tests in Central-Phenix City, the defending state champ who beat Thompson, and Cocoa (Fla.) by a combined 54-37.

Hoover has not only played tougher competition, but has the added fuel of redemption from last year’s 31-28 loss in the semifinals.

But he’s still made the plays to put bring his team back against Central-Phenix City for an opening-night victory, before then putting his team up 37-10 in the third quarter against Cocoa, which led to an early exit.

You see, Hoover has as much or more talent than anyone in the state at every position and doesn’t have to rely on Ashford for the win.

But, shutting him down is also Thompson’s best bet, and the main reason the Warriors won last year’s semifinal matchup.

With George Pickens to throw to last year, the Bucs weren’t able to take advantage of what should have been a potent offense against Thompson’s defense, but that was largely because of the running game from Ashford and McCammon.

In game one last year, Thompson fell 45-26 because the Warriors couldn’t contain the edge with Ashford and McCammon pounding the rock on the way to the win.

Thompson, however, made the adjustment in game two and with Hoover’s passing attack not coming together, the Warriors pulled off the win.

Going into this year’s matchup, containing Ashford’s run game will be key again, while also working on stopping the pass with an extremely young defense featuring several young playmakers.

To this point, the Thompson defense has handled the transition into this year well only allowing its 27 points in the second half with a lot of the backups playing.

We all know, it’s different against Hoover, however. It will not only mark the Warriors’ first true test, but the nerves will also be present in the biggest game a lot of these young players have ever played in.

The good news for Thompson, is the offense has picked up right where it left off.

The Warriors have totaled 749 yards thanks in large part to the production of senior quarterback Sawyer Pate, who is now 25-of-34 for 398 yards and seven touchdowns in limited time.

But what makes it special and so dynamic are the array of receivers that make defenses have to not only worry about that ground game but covering everybody out wide thanks to the success of Michael Pettway, Tre Roberson and J.B. Mitchell.

Those guys have made life easier for Pettway because of their route-running ability and ability to catch almost every ball.

While Hoover may have a slight advantage from talent and experience, Thompson has possibly the best young talent in the state right now with SEC-caliber players all over the field.

Thompson’s keys in this game will be handling the pressure of a tight game offensively against a very talented team, while the defense will have to come ready to play with several young playmakers.

If the last two years have told us anything, it’s to expect a great game between these two teams.

Right now, I think Hoover has an advantage because of the redemption factor and the level of competition coming into the game, but Thompson’s offense will make this one extremely close and entertaining. They’ll have chances to win it in the second half, while the defense will have to step up and make big plays as well.