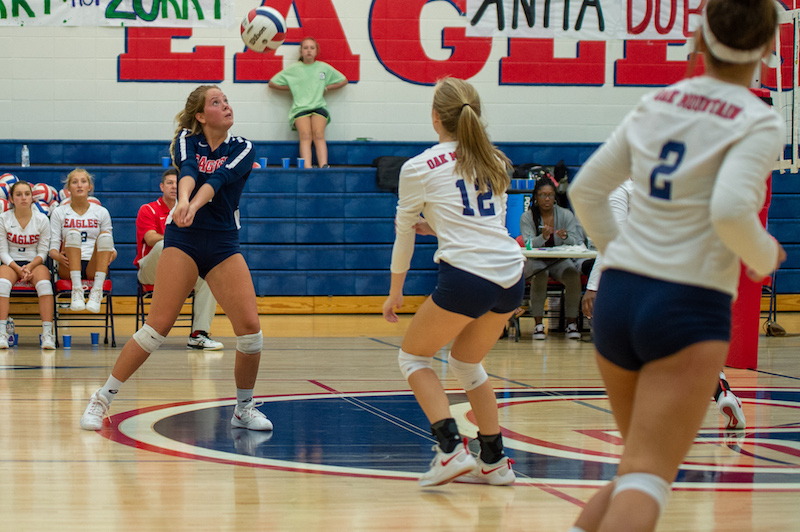 The Oak Mountain Eagles swept Winfield on Thursday, Sept. 5, to pick up their 13th win of the 2019 season. (For the Reporter/Larry Dancy)

NORTH SHELBY – After a difficult loss to a good Bayside team to open the 2019 season, the Oak Mountain volleyball responded in a big way with a 4-1 record at the Briarwood serve-off tournament, a 6-0 record at its own tournament and a 13-2 record since that first loss.

The Eagles’ most recent success came on their home floor against Winfield on Thursday, Sept. 5, as they picked up an easy three-set sweep to improve to 13-3 overall this season.

Oak Mountain, who is still a young team with only three seniors on the roster, is looking to get back to the state tournament this year after missing out a season ago, and early in 2019, the Eagles look set to do so.

The opening set against Winfield showed why this team can be so dangerous with the Eagles controlling every aspect of the game and making very few mistakes on their way to an opening-set win of 25-6.

That became the most dominant win of the three sets, and one of their best showings of any set this season, as their confidence continues to build.

Oak Mountain allowed 10 points or less for the second set in a row with a 25-10 win in set two.

The impressive play continued into the final set, as Oak Mountain allowed just 11 points to pick up a 25-11 win and close out the straight-set victory.

For the night, Oak Mountain outscored Winfield 75-27 and accomplished everything it hoped for as the Eagles look to fine tune their play heading into area contests in the coming weeks.

Of their 13 wins so far this season, the Eagles have now won 11 of them in straight sets and have won at least one set in each of their losses.

BCS volleyball falls in thrilling 5-setter against 6A Homewood