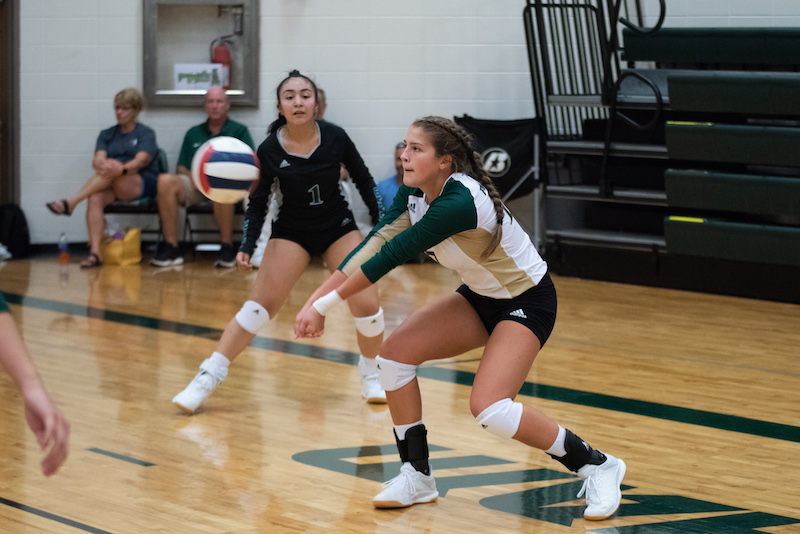 Hartselle – There was a lot of talent on the floor when three of the state’s best teams met at Hartselle High School for a tri-match on Thursday, Sept. 5, featuring the home Tigers, who are No. 5 in the Class 6A standings, as well as the No. 7 Pelham Panthers and the Class 5A No. 2 ranked Brewer Patriots.

It marked another difficult two games for the Panthers on an already difficult schedule to this point, as they try to prepare for area play, which is now less than a week away.

Pelham, who was coming off a win at Brookwood earlier in the week and a 4-2 record at the Mayor’s Cup, got off to a strong start on the night with a three-set victory over Brewer in thrilling fashion.

The Panthers flashed their impressive skills early in the first set and were eventually able to gather a 19-11 advantage. The Patriots put together a run to climb back into the set, but Pelham put it away late for a 25-18 win in their opening set of the night.

In the second set, the script flipped in favor of Brewer.

Pelham played well throughout and had chances to take a 2-0 lead, but late in the set, it was the Patriots who made the plays to pick up a 25-18 victory and even the match at 1-1.

That led to a thrilling tiebreaker set that in a match that went down to the wire. Neither team was able to create much separation in the final set, which led to a 14-14 tie.

Erin Long led the team with 14 kills in the win, while Elizabeth Hayhurst added eight kills. Victoria West, Jaden Jones, Macie Jones and Caitlin Gibson all had either three or four kills as well in a balanced attack.

Long also led the team in digs with 11, while Jerica Snowden finished second on the team with seven. Behind that, Smith posted six digs and Ashley Anderson five, while Amore Marshall and Melendez each added four.

After that testy three-setter to open the night, Pelham took right back to the court against host Hartselle looking to pick up the upset, but with the Tigers having home court advantage they had gotten to rest during that long match between the Panthers and Patriots.

The stamina and freshness were difficult to keep up with for Pelham, but in the first set, the Panthers held their own for the majority of the time. They stayed within striking distance for a while, but Hartselle eventually went on a run late to close out the set by a final score of 25-20.

With that loss, it was tough for the Panthers to bounce back, and the Tigers took advantage with a strong start to the second set before going on to pull away for a 25-15 win to complete the 2-0 sweep.