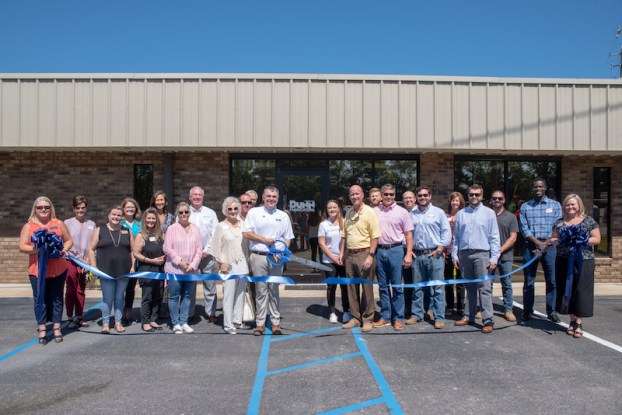 A ribbon cutting on Aug. 30 marked the opening of Dunn Fabricators in the former Central Alabama Fabricators facility on Industrial Parkway in Columbiana. (Reporter Photo/Keith McCoy)

COLUMBIANA – Dunn Fabricators, a division of Dunn Building Company, has opened on Industrial Parkway in Columbiana.

City leaders and community stakeholders gathered at the facility for a ribbon cutting and celebratory lunch Aug. 30.

“It’s a big day for the company,” Fabrication Manager Matt Chance said. “The city has done everything in the world to make this an easy transition. You hear about that Columbiana hospitality, and we have received it. It has reaffirmed that we made a good decision.”

In June, Dunn Building Company, a 141-year-old specialty building contractor headquartered in Birmingham, announced plans to expand its steel fabrication operations to Columbiana following the purchase of the former Central Alabama Fabricators building in an auction.

“We’re going to use this to better serve our customers,” Dunn Building Company President Andrew Edwards said. “We’re really happy to be here.”

As one of nine operational companies owned by Dunn Investment Company, Dunn Building Company is a design-build general contractor for low-rise steel-framed buildings.

“Columbiana is so happy to have Dunn Fabricators locate here,” Mayor Stancil Handley said. “You have no idea how thrilled our staff is.”