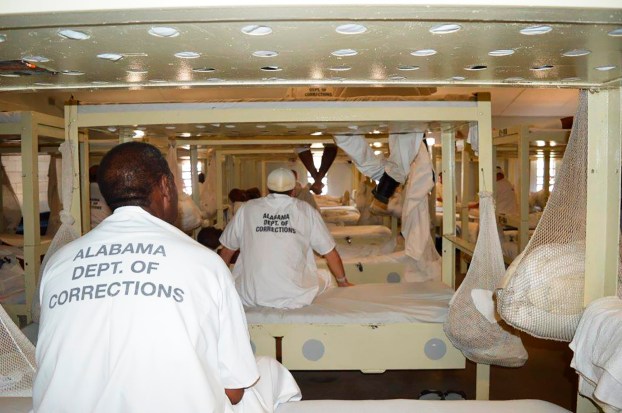 Inmates sit in a treatment dorm at Staton Correctional Facility in Elmore, Ala., Wednesday, Sept. 4, 2019. The Department of Justice has threatened to sue Alabama over excessive violence and other problems in state prisons for male inmates. (AP Photo/Kim Chandler)

Corrections Commissioner Jeff Dunn said Sept. 4 that the facility epitomizes many of the problems facing the system. Aging facilities where too few officers try to keep order over too many inmates in building layouts that make it difficult to conduct surveillance and hold training classes.

The Governor’s Study Group on Criminal Justice toured the prison as part of its work to make recommendations ahead of the 2020 legislative session. The panel was convened as the state faces continued criticism of prison conditions, a federal court order to boost prison staffing and improve mental health care and the threat of a lawsuit by the Department of Justice.

Prison officials also briefed the task force Sept. 4 on efforts to increase staffing and safety, including a salary increase and an increased use of contraband sweeps relying on assistance from other law enforcement groups. Ivey’s administration is weighing a plan to build three new mega-prisons. During the tour, Dunn pointed to classroom space at Staton, something he said the prison system wants to provide more of to inmates.

“We have little pockets of good going on. We just don’t have the space,” Dunn said.

But former inmates and family members of current ones packed the panel’s meeting in Montgomery. While they did not get a chance to speak at the meeting, they want the panel to listen to the experiences of those behind bars.  A few openly chuckled as prison officials described stepped up security efforts.

Lee Lewis of Birmingham, who served time for assault, said stabbings and other violence occur regularly behind bars.

“My time being incarcerated, I’ve seen non-violent offenders become violent because of the pressure. I’ve seen good officers seem like they couldn’t take the pressure and quit. I’ve even seen an officer killed,” said Lewis, 62.

Former inmate Cedric Young, 42, said he was released “from “behind the fence” last year.

“You have suicides. You have people stabbing people. And the guards don’t do anything about it.”

“Instead of building new prisons, we need to release some of them, the non-violent offenders,” Young of Pratt City said.

The Justice Department in April issued a scathing report about what it called excessive levels of violence and inmate deaths in Alabama’s prisons for men. The report listed a chilling litany of examples of violence and said a critical staff shortage was one of the significant factors behind what it called unconstitutional conditions.

Two inmates have been stabbed to death so far this year at Staton, the prison the task force toured.