MONTGOMERY – On Tuesday, Sen. Cam Ward (R-Alabaster) was re-elected Chairman of the Alabama Legislature’s Committee on Energy Policy, which is tasked with recommending to the Governor and the State Legislature courses of action to tackle Alabama’s energy challenges. 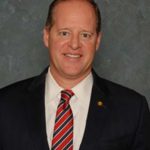 “It is an honor to once again lead this team of citizen-legislators, as we work with Gov. Ivey’s administration to craft policies that will encourage the development of cheap and reliable energy sources,” Ward said. “These are unprecedented times in the energy industry, and we need policies that breakdown the intrusive government regulations that so often hold the private sector back from delivering innovative energy solutions to consumers.”

The Energy Policy committee is made up of 13 state legislators, including four members appointed by the Speaker of the House of Representatives and four appointed by the President Pro Tem of the State Senate.

According to a study by Auburn University at Montgomery, the total economic impact of Alabama’s energy industry in 2015 was $13.22 billion. Additionally, the AUM study found that the energy industry generates 124,000 jobs in Alabama.

“In so many ways, Alabama is at the forefront in producing cheap, reliable energy for the country. The Browns Ferry Nuclear Plant is the second-largest nuclear facility in the U.S., we rank fifth in the nation in electricity generated from biomass or wood and wood waste, and we have the third-highest number of offshore oil rigs in the country,” Ward observed.

“Alabama’s energy companies are doing innovative work and my goal is that we have policies in place that will reward innovative solutions, which will lead to reduced energy prices for families and businesses,” Ward concluded.