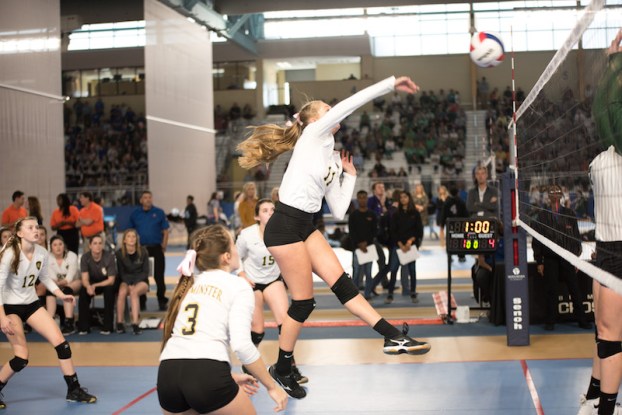 The Westminster at Oak Mountain Knights are off to a 14-6 start to the 2019 volleyball season following two consecutive appearances in the Elite Eight the last two seasons. (File)

NORTH SHELBY – Each of the last two years, the Westminster at Oak Mountain volleyball team has reached the final eight teams in the 1A classification, but have fallen in the first round of the state tournament.

Through three weeks of the 2019 season, it’s clear the Knights are on the path to not just get back to the state tournament for the third year in a row, but avenge the heartbreak they’ve experienced each of the last two years.

That attitude was evident in a tri-match at Indian Springs on Thursday, Sept. 5, as Westminster was able to pull off two sweeps against Altamont and host Indian Springs to improve to 14-6 overall this season.

A team with six seniors this year, they’re all inspired and leading several other young players. Entering the tri-match, the Knights were coming off a strong 3-1 (25-20, 15-25, 25-9, 25-13) victory over American Christian, while also posting a 5-2 record at the Lincoln Invitational the weekend before.

Against Altamont, Westminster got the tri-match off to a strong start with a 25-12 victory in the opening set. That was as close as any set the Knights played the entire night.

In the second set, they duplicated that score on their way to a 2-0 victory with two set wins of 25-12 to start the night off 1-0.

That seemed to just be a warmup for Westminster, who came out in the opening set against Indian Springs and played the most dominant set of the night with a 25-10 victory to again start out with a 1-0 lead.

With Indian Springs in a quick hole, the Knights took advantage and closed the tri-match out with their third 25-12 set victory of the night to complete two straight sweeps.

Thanks to those two victories, Westminster at Oak Mountain has now won six of its last seven matches as well as 10 of its last 12.

In addition to that success, the Knights also went 3-3 at the difficult Briarwood Serve-Off tournament to start the 2019 season. Their only losses in that tournament were to Auburn, Homewood and Faith Academy, all of whom are in much higher classifications.

To this point in the season, 11 of Westminster’s 14 wins have come via straight-set victories, as the Knights have looked dominant at times, and like a team ready to compete for a state championship in October.

By ALEC ETHEREDGE | Sports Editor The soccer season in Shelby County never disappoints, and the 2019 season marked one... read more