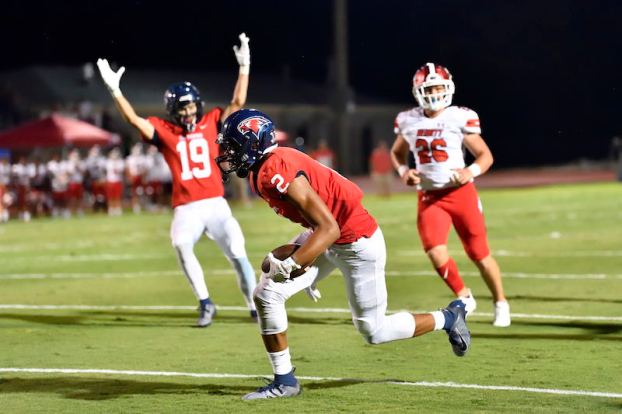 The Oak Mountain Eagles found themselves in a back-and-forth game with Hewitt-Trussville on Friday, Sept. 6, but couldn't keep up in the fourth quarter. (For the Reporter/Barry Clemmons)

Runs by Hewitt’s Sean Jackson, from 27 yards out with 10:32 on the clock in the fourth quarter, and Cade Carruth, from one yard out with 5:10 remaining, were the game-deciding scores.

Hewitt-Trussville’s Sam Johnson returned the opening kickoff 94 yards for a touchdown, but the Eagles had a brief lead with less than one minute remaining in the first quarter when Evan Smith passed to Noah Young for a 21-yard touchdown and Hogan Morton added the point-after.

Trussville then scored on a 48-yard run by Jackson, a two-point conversion pass from Carruth to Omari Kelley and a 45-yard run by Armoni Goodwin.

Smith answered with a two-yard run to make it 22-14 at halftime, and Eagles cut into the lead again with a 15-yard touchdown run by Judah Tait and a two-point conversion from Smith to Young.

Goodwin’s five-yard scoring run and two-point conversion run made it 38-27, and then Oak Mountain scored its final touchdown on a one-yard run by Smith.

Hewitt-Trussville outgained the Eagles 559 yards to 426 yards and 28 first downs to 25.

Young caught four passes for 39 yards, and Zach Taylor and Juston Taylor each had nine tackles for the Eagles defensively, followed by Chase Schwender with eight tackles.

The region road does not get any easier for the Eagles in the coming weeks, as they visit Thompson on Sept. 13 and visit Hoover on Sept. 20.

By ALFRED KOJIMA | For the Reporter MONTEVALLO – Senior quarterback Malik Inabinette threw for two touchdowns and ran for... read more