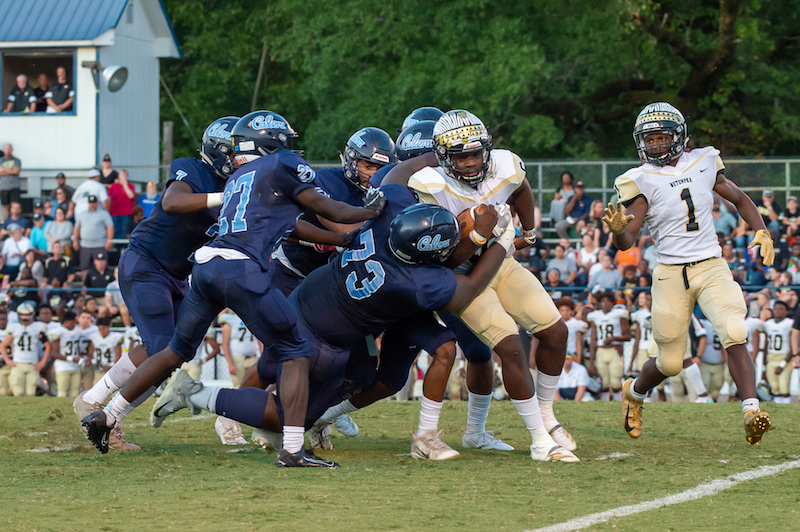 The Calera Eagles dropped their region opener to Wetumpka on Friday, Sept. 6. (For the Reporter/Larry Dancy)

CALERA – The Calera Eagles dug out of an early 14-0 hole, but ultimately couldn’t keep pace with the Wetumpka Indians on Friday, Sept. 6, in a difficult 35-7 home loss to kick off region play.

Early in the game, it looked as if Calera was set to strike first after driving from their own 20 down to the Wetumpka 15-yard line, but a fumble led to a scoop and score for the Wetumpka defense, who had flipped the momentum in the blink of an eye to take a 7-0 lead with 3:52 left in the opening quarter.

That became the theme of the night as the Eagles couldn’t limit mistakes in key situations, which was costly against one of the best teams in Class 6A that doesn’t need any additional help to win.

The Wetumpka defense stepped up and made another play thanks to an interception that was returned inside the Calera 10-yard line.

The Indians eventually were pushed into a third-and-long situation from near the 30-yard line, but instead a 25-yard touchdown pass put Wetumpka on top 14-0 early in the second quarter.

Calera, however, had played well enough minus those two mistakes to be in the game, and on the Eagles’ next drive that showed.

They were able to answer with a 13-play 80-yard drive capped off by a15-yard touchdown run that quickly cut the Wetumpka lead to seven points at 14-7 with 6:01 left in the half.

Just more than a minute later, the Wetumpka offense had a quick answer of its own thanks to a 25-yard touchdown pass that put the Indians up 21-7, which became the halftime score soon after.

It was a half where both sides of the ball played well for Calera, but a few small mistakes became big and led to the two-touchdown deficit at the half.

Coming out in the second half, Calera was hoping to pull off a comeback, but the Indians were able to do exactly what they wanted to with a long drive in the third quarter that took the majority of the time off the clock in the period.

Eventually, the drive was capped off by a 15-yard touchdown run that put Wetumpka on top 28-7 with 2:48 left in the third.

That seemed to be the final blow for Calera, as Wetumpka quickly added its fifth and final touchdown on a 4-yard run to end the third quarter.

Up 35-7, the Indians were content to run the clock in the final quarter, as they closed out the region win.

Calera is now 1-2 on the season after starting 1-0, and is set to take on Stanhope Elmore at home on Friday, Sept. 13.