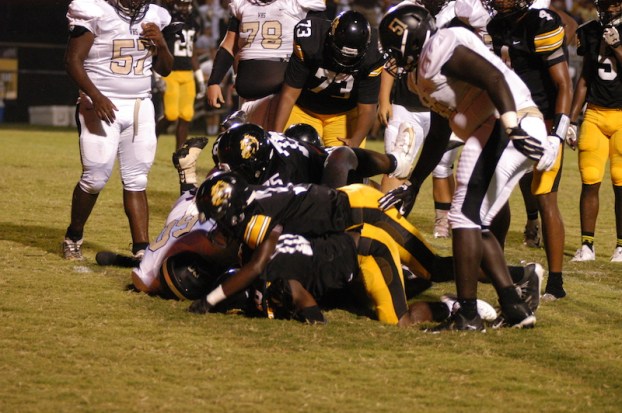 LaFAYETTE — The LaFayette Bulldogs got the 2019 home season off to a good start with a dominating 45-20 win over a Class 2A Region 4 rival in the Vincent Yellow Jackets. Head coach James Lucas’ guys scored in just about every way possible in racing out to a 39-0 halftime lead.

They ran back the opening kickoff for a score, had a punt return for another touchdown, had a long scoring run by the quarterback and to cap off a half of big plays a 96-yard interception return with just a few seconds left in the half.

The lopsided win evens their record at 1-1 on the season and 1-0 in Region play. They will be back at home at Bulldog Stadium the next two Fridays with key Region matches with Thorsby and Reeltown.

“We really worked on our offense and our special trams in practice this past week, and that hard work we put in really showed up tonight,” Coach Lucas said. “I thought we played well last week on defense against Lanett, but came up short on the offensive side of the ball. I was pleased to see the improvement in tonight’s game. It was good that we got to play our younger guys tonight. We even had an eighth grader out there tonight. I tell all of them they are going to be good when they get older and have more experience.”

LaFayette won the opening toss and elected to take the football. Senior running back KeAndrew Peterson fielded a wobbly kick just inside his 30 and followed good blocking to the sideline where he had an open field to the end zone. Just like that the Bulldogs had a 6-0 lead with just 14 seconds off the clock. A successful PAT made the score 7-0 with 11:46 left in the opening period.

The Yellow Jackets couldn’t moe it on their opening possession. A combination of penalties and lost yardage plays pushed them back from t he 17 to inside their 10, where they punted it away on fourth down. Jordan Walker gathered the ball in at his 45 drifted through traffic to the far sideline and then turned on the speed for the east end zone, crossing the goal line untouched,

The Bulldog offense had yet to get the football, but the team had a two-TD lead on kick returns. The point-after failed, and with 8:53 showing in the first quarter LaFayette held a 13-0 lead.

After an exchange of possessions, the Bulldogs had the ball on the Vincent 43 and quickly made the end zone behind quarterback Jordan Walker, Runs by Xavier Holloway and Victor Tolbert advanced t he ball to the 18. From there, Walker kept the ball on an option play around left end and easily made the end zone for LaFayette’s third TD of the first quarter. A successful point-after made the score 20-0 ink favor of LaFayette.

The Bulldogs added another score on a beautifully executed pass play near the midway point of the second quarter. After taking over on downs on their 34, LaFayette opted for a long pass on first down and it worked to perfection. Ja’Mariae Daniel took off on a go route straight down the field. Quarterback Jordan Walker took a deep drop and lofted a pass deep down the field. Daniel had his man beaten on the play. The only question was could he catch up to the football. Daniel did, catching it on the dead run and completing a 66-yard scoring play, much to the delight of the big home crowd at Bulldog Stadium. The point-after failed, and with 4:38 left in the half the LaFayette lead held at 26-0.

Vincent had a nice little drive going on their next possession before the Bulldogs snuffed it out with a turnover. Jadarious Crim intercepted a pass on the LaFayette 38 and returned it down the left sideline all the way to the Yellow Jacket 10.

Not wanting his team to let up, Lucas urged the offense to get more points. “Everybody do your job!” he exclaimed. “Don’t fumble it. Put it in the end zone.”

They did just that on the first play. Peterson took a toss sweep from Walker and ran untouched to the end zone off the right side of the line. That made the score 32-0 with 3:32 left in the half.

It looked like Vincent might get a score late in the half when they drove the ball inside the LaFayette 20 with around a half-minute left. That’s when LaFayette would come up with one final big play in a half filled with them. Xavier Holloway intercepted a pass just inside the five and ran it back 96 yards for a score. He had a clear field in front of him when he picked off the pass, and no one from Vincent could run him down. A successful PAT try made the score 39-0 with 13.9 seconds left in the half.

With a comfortable lead at the half, LaFayette played lots of their reserves in the second half. The visitors showed some fight by putting up three touchdowns to make the final score a more respectable 45-20. It was 45-6 going into the final quarter, when the Yellow Jackets had two scoring drives to trim the final margin to 25 points.

The Bulldogs will have major tests the next two weeks with Thorsby and Reeltown.

“What I like is that we will be at home. They will have to come to our place,” Lucas said. “I think we play our best football in Bulldog Stadium. We will have our work cut out for us. but I think we have the kind of guys who can step up to challenges.”