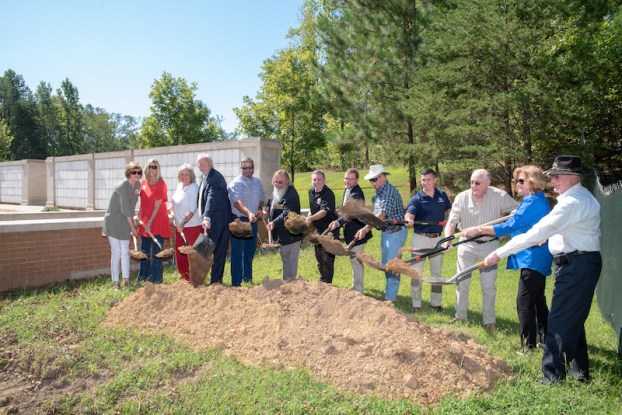 Support Committee of the Alabama National Cemetery members and other dignitaries participate in a groundbreaking ceremony for the cemetery’s scenic overlook project. (Reporter Photo/Keith McCoy)

MONTEVALLO – A Sept. 6 groundbreaking ceremony marked the beginning of construction of a scenic overlook at the Alabama National Cemetery.

Support Committee of the Alabama National Cemetery Chairwoman Pam Nichols called the groundbreaking a “milestone event” in the project, the purpose of which is to build an outdoor sanctuary for the loved ones of veterans to use as they reflect on the lives of those they have lost.

“This marks the beginning of a visionary dream becoming a reality,” Nichols said.

The overlook will sit 40 feet above an elbow turn in Shoal Creek and will be accessible by a path starting behind the columbarium.

On March 13, 2013, the SCALNC selected Sherlock, Smith, and Adams Inc. Architects-Engineers to design the overlook, according to the SCALNC website. The concept proposal was approved in December 2013.

Over the last six years, the organization has raised $607,000 in donations to fund the overlook’s construction.

“We had no idea what a long and windy road this project would take and what a blessing it would be,” SCALNC Chairman Emeritus Bob Barefield said, and added the overlook is slated to be completed in January 2020.

Gold Star Mother Adrienne Bourland, whose son Ken Bourland is buried in the cemetery, said the overlook will further enhance the beauty of the grounds.

She praised the volunteers and others who have been instrumental in bringing the project to fruition through fundraising and awareness.

“Many people have worked weeks of hours,” Bourland said. “This will be a quiet, beautiful place for sorrow next to their (veterans’) resting place.”

The SCALNC extended thanks to its volunteer members and volunteers who helped with the groundbreaking ceremony, along with the Alabama National Cemetery staff, the Patriot Guard, American Legion Riders, Chic Cecchini and members of the Lily of the Cahaba DAR.

To donate to the Scenic Overlook Project or for more information about the Support Committee, visit Scalnc.org.