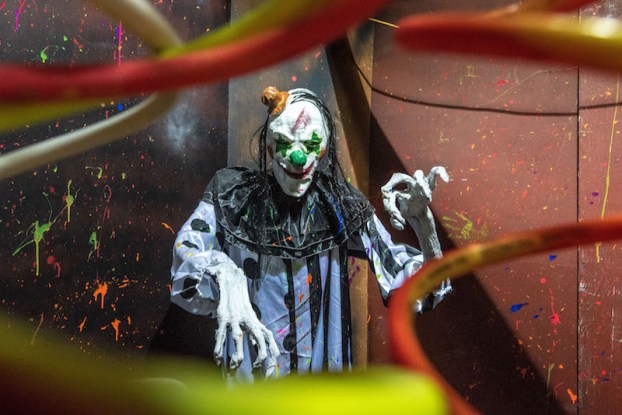 The Phobia Factory in Columbiana will feature rooms for different phobias, such as coulrophobia, or fear of clowns. (Reporter Photo/Keith McCoy)

COLUMBIANA – In three weeks, Kevin and Vicki Ricke will open the doors to their new entertainment venue and invite residents to face their fears.

Known as the Phobia Factory, the family-oriented venue is comprised of different rooms in which visitors will come face-to-face with real phobias, such as a fear of snakes or clowns.

“They can choose their own experience,” Vicki Ricke said. “I say, ‘Pick your poison.’”

The Phobia Factory will be housed in the former Elastic Corporation of America facility, located at 455 Alabama 70 in Columbiana.

During a presentation at a City Council meeting in February, Kevin Ricke emphasized his and Vicki’s efforts to create a venue that offers excitement without “blood and guts” displays.

Families with younger children will have the option of coming to the Phobia Factory during daytime hours for what Vicki described as a “tamer” version of what they will offer in the evening hours.

Each room bears the name of a phobia it is designed to evoke.

The following are among the phobias to be featured at the Phobia Factory:

The venue will also feature a laser maze and a 100-foot tunnel called the Vertigo Vortex.

Vicki said they have repurposed many of the materials that were already inside the building to create each room.

“It’s been an adventure,” Vicki said, adding they started constructing the rooms in April. “We’ve been in fast-forward for a while. This was a very big undertaking.”

Tammy Hawkins, owner of Open Door Studios, has worked with the Rickes to design the sign that will be painted on the building’s exterior.

The Phobia Factory’s grand opening is set for Friday, Sept. 27 and Saturday, Sept. 28.

FROM STAFF REPORTS PELHAM—Easterseals of the Birmingham Area, along with guests, will be celebrating the national organization’s 100th year of... read more