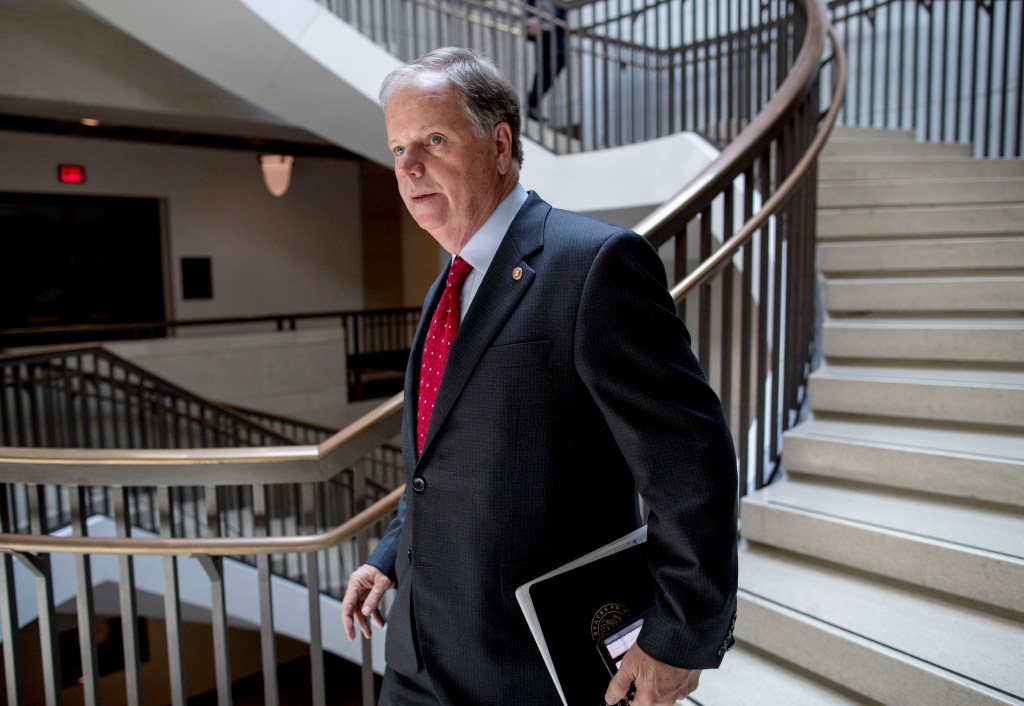 Sen. Doug Jones arrives for a closed door meeting for Senators on election security on Capitol Hill in Washington. Jones, a Democrat who pulled off a stunning political upset in Alabama two years ago, launched his reelection bid Sunday, Sept. 8, seeking to create another Deep South victory in a Republican-dominated state. (AP Photo/Andrew Harnik, File)

BIRMINGHAM — U.S. Sen. Doug Jones, a Democrat who pulled off a stunning political upset in Alabama two years ago, launched his reelection bid Sunday, seeking to create another Deep South victory in a Republican-dominated state.

Before several hundred cheering supporters in Birmingham, Jones kicked off his 2020 campaign. Invoking the campaign theme of “One Alabama,” Jones said he is a senator who represents all of Alabama and will fight for everyone in the state.

“The success of our state depends on engaging the power and the spirit and the intellect of our millions of citizens,” Jones said.  “No matter the zip code you live in, your race, your religion, your disability, your economic status  — no matter who you love— we all want to succeed in a world where no one, no one is left behind,”  Jones said.

His 2017 victory was aided by scandal when Moore, already a divisive figure among state voters, was accused of sexual misconduct. Several women said Moore pursued romantic and sexual relationships with them when they were teens and he was a prosecutor in his 30s. One of the women was as young as 14.

Moore vehemently denied the accusations and is now part of a crowded GOP field vying for a chance to challenge Jones in 2020.

Jones is running in a year when Trump, who is intensely popular in the state, will be on the ballot, driving GOP turnout, Hughes said. Hughes said Jones also could face a more mainstream Republican who doesn’t have the negatives that Moore carried.

“There would have to be something calamitous to prevent Republicans from turning out,” Hughes added.

With partisan control of the Senate on the line, Republicans have made defeating Jones a top priority in 2020.

The Alabama Republican Party has a countdown on its website ticking off the days until he is out of office. The National Republican Senatorial Committee drove a billboard carrying truck outside the Birmingham venue calling him “Anti-Trump Democrat Doug Jones” who “sides with socialists.”

“For goodness sake, a socialist? Come on,” Jones cracked to the crowd at his kickoff rally.

The son of a steel mill worker, Jones grew up in the working class city of Fairfield, just west of Birmingham. As U.S. attorney during then President Bill Clinton’s administration he was best known for prosecuting the Klansmen who bombed a Birmingham church in 1963, killing four black girls.

Jones is positioning himself as a moderate— a gun owner who supports “narrowly tailored” universal background checks for gun purchases. He is urging the state to expand Medicaid in a state with high rates of infant and maternal mortality.

GOP opponents are expected to highlight Jones’ support of abortion rights – in a state where voters put anti-abortion language in the state Constitution and lawmakers are attempting to ban abortion outright — and his opposition to some of Trump’s judicial nominees.

Speaking to reporters, Jones acknowledged that he has a political “target on my back and on my chest.”

And he retorted that no one gave ever “gave us a chance” of winning in 2017.  He urged voters to “look at my record” and not just labels slung at him by opponents.

“There is no way … if they look at my record they can say I’m a liberal, a real far conservative. I keep telling people. ‘I’m just Doug. I do what I think is right for the state.'”

“If that’s the best they’ve got,” Jones said of labels like the truck outside. “Bring it on.”

For Alabama Democrats and some moderates, Jones’ 2017 victory was water in the red state desert. Packing his campaign kickoff, many acknowledged the tough fight to come, but said they remain hopeful.

“We need him,” said Sally Livingston, a 58-year-old educator in attendance.

“Whether it was voting against Judge Kavanaugh, supporting on-demand abortions, or advocating for gun control, Doug is totally out of touch with Alabama,” said U.S. Rep. Bradley Byrne, a congressman running for the Senate seat.