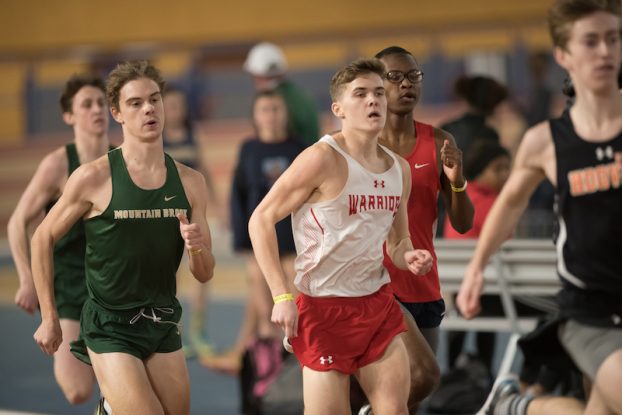 Thompson's Jace Jones, above, has now won his first two races of the 2019 cross country season after winning the Chickasaw Trails Invitational. (File)

OAKVILLE – While no local boys’ team finished higher than 14th in the overall standings of the Chickasaw Trails Invitational at Oakville Indian Mounds Park on Saturday, Sept. 7, Thompson’s Jace Jones out ran everybody individually to claim the top spot on the podium at the event.

The senior, who was one of the best distance runners a year ago, finished the event with a time of 15:50.93, which was seven seconds faster than Ethan Strand of Vestavia Hills.

It marked the second event of the season that Jones had competed in, and it marked his second win after also claiming first place in the Warrior Invitational at Thompson’s home course of Veteran’s Park.

In his first win, Jones ran the 2-mile event in 10:27.23 to get his season off to a fast start, and now that he’s run his first 5,000-meter race, he has proven to be one of the best runners in the state through the first two weeks of the season.

Jones finished just ahead of another local product in Oak Mountain’s Walker Cole. The junior for the Eagles finished the race in fourth with a time of 16:01.22, which was less than two seconds behind a podium finish.

Cole has also competed in two events so far this season and has yet to finish outside the top five.

In his first event of the 2019 season, Cole set a personal record of 16:01.20 to place third on the podium at the Early Bird Twilight, and just missed breaking that record by 0.03 seconds at the Chickasaw race.

No other individuals from the county finished inside the top 20, but in the overall team standings, Spain Park finished 14th and Oak Mountain finished 17th. Chelsea wasn’t too far down the list in 24th, while the Pelham Panthers finished 32nd and the Calera Eagles claimed 33rd.

Individually, the next highest finisher was Chelsea sophomore Miles Brush, who took home a finish of 22nd thanks to a time of 16:44.45.

Spain Park’s highest finisher was senior Max Smith, who finished 55th with a time of 17:27.21.

He was one of four Spain Park runners to finish between 55th and 77th, which is a big reason the Jags finished as the highest team from the county. Keith Warner, Kenneth Bishop and Garrett Bishop, all sophomores or freshmen, finished 64th, 71st and 77th, respectively.

Also in that range of finishers was Pelham’s highest placer thanks to a finish of 73rd from Dominic Fanella, who finished the race with a time of 17:49.83.

Oak Mountain’s next highest finisher behind Cole was Kenny Chavez, who finished 100th out of 304 runners with a time of 18:18.72.

In the small school’s event, Westminster at Oak Mountain finished 14th overall as a team, while senior Arjun Varadhan was the highest finisher in 54th with a time of 19:20.52.

In an event featuring 304 runners in the large school race and 322 in the small school event, those athletes put together strong performances and will be names to watch throughout the 2019 season.