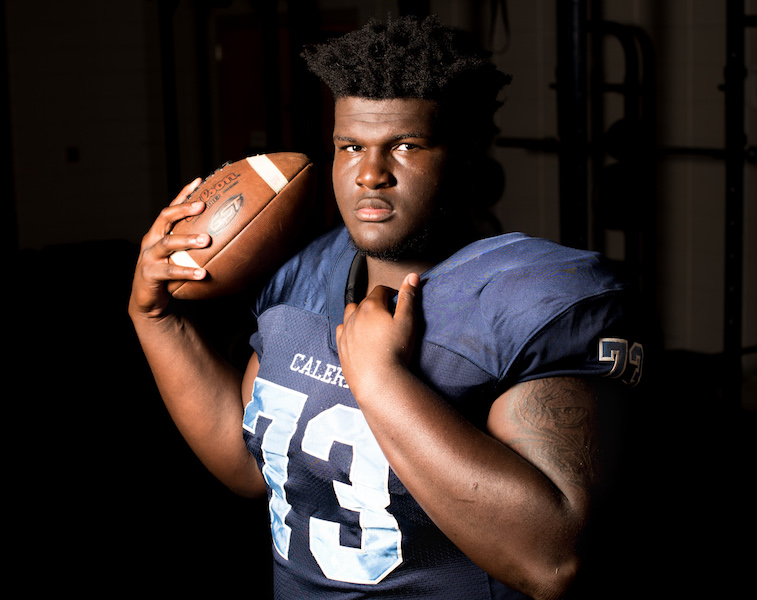 With college coaches begging to have him on their team, fans trying to sway him and a team full of players looking up to him as a leader, you may expect everything to be perfect for Calera senior defensive lineman Jayson Jones, but like all of us, he’s had his own share of demons to battle.

His entire life, Jones has battled playing the game out of love or to just get him where he wants to go.

But finding a passion on the defensive line and a love for hitting people and being physical made the four-star defensive tackle, who has a frame of 6-foot-7, 340 pounds, fall in love with the sport.

“It’s the only sport where it’s OK to break bones and get away with it,” he said. “I love playing on the defensive line, I love making big tackles and I love to hit people.”

Growing up that same passion wasn’t always there, and in his most recent high school football season, it wasn’t there either.

On his journey for joy, however, the University of Alabama commit was able to overcome his demons to not only find a love for the game again, but become one of the most sought after defensive linemen in the country.

Jones got his start in football at the age of four when his dad asked him if he wanted to play. Already a big boy at that young age, he quickly made his debut on the defensive line—a position would soon bring him a future he didn’t know was possible.

“They stuck me at defensive line and I just tore up everything,” Jones said with a smirk. “I was always bigger than everyone.”

But that young dominance only lasted for a short while before Jones decided to stop playing after first grade because he didn’t enjoy it as much as he thought he would.

“At first, I just didn’t really want to play anymore,” he said. “I decided not to play from second until sixth grade.”

Being bigger than everyone and knowing he could be pretty good at the game made it difficult for Jones to stay away from the game for too long though.

“I saw all of my friends playing and started thinking to myself ‘maybe this could be a good opportunity for me,’ but it was hard. It was really hard,” Jones said of his entrance back into the sport. “I was so uncoordinated and wasn’t conditioned. It was horrible.”

Jones, determined not to give up this time, stuck it out and went on to play both his seventh and eighth grade year for Calera’s middle school team.

The year before he joined, the Eagles went 2-6, but the two years with his addition, they went on to have records of 8-0 and 6-2, respectively.

Through the difficulty of trying to regain his joy for the game and battling to get into game shape, Jones eventually started seeing the light at the end of the tunnel through those middle school days, and it all came together heading into his freshman season at Calera.

“Ninth grade year is when I realized that I wanted to really play this game and that I could be great at it,” Jones said.

And it wasn’t his own skill, but the leadership of upperclassmen Mackenan Thompson, Yatil Gant, Cody Cook, Caleb Buckhannon, Blake Jones, who helped Jones find his passion for the game because of their work ethic and ability to actually make him want to work harder.

“They put me on my butt so many times,” Jones said chuckling at the memory. “They really pushed me in practice because I had to go against them every day. I was trying to block those guys and get around them.”

Jones, who wasn’t used to getting beaten by anyone because of his size and strength, had met a challenge, and hating to lose, it made him want to get back up and beat them.

“I’m so blessed that I got the chance to go against those guys because I don’t know if I would be as physical as I am now without those lessons,” he said. “I wasn’t used to that so I would always get mad and it fueled me to get better.”

Being a freshman with his size and ability to play one of the most physical positions on the field, Jones quickly started getting recruiting attention, which led to his first offer from Eastern Kentucky University during his freshman year.

And following an impressive sophomore season, his recruiting soared through the roof when offers from Alabama, Georgia and several other SEC and high-caliber Division I schools came.

But one year later, Jones started to question his joy again.

“Last year, I’m not going to lie to you, I didn’t enjoy football one bit,” Jones said. “And that was before the season even started. I wasn’t going to quit because God gave me a talent and I wasn’t going to let that go to waste, but I wasn’t having fun and I didn’t want to go to practice or games. I was like ‘dang, what’s wrong?’ I had lost my love for the game.”

It was all part of a tumultuous season that ended with a 1-9 record for the Calera Eagles and a lot of question marks surrounding the future of the program. 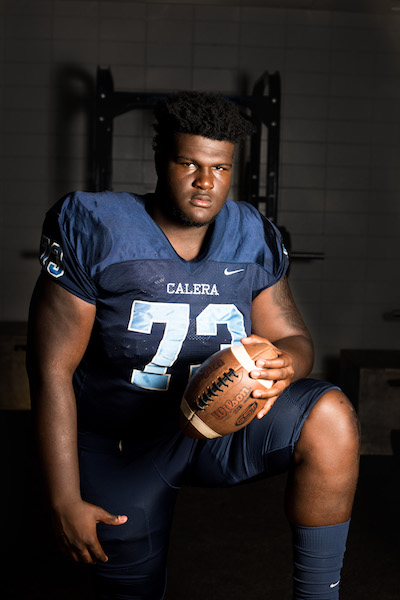 Jones also spent part of the season injured and just never seemed to play with the same angst he did as a freshman and sophomore.

Following the season, however, the Eagles were forced to bring in a new coach in Trey Simpson after former head coach Andrew Zow left for Bessemer City, and there seems to be a new-found excitement around the team and a belief they can be a playoff team again.

“I was so confused by what was happening, but I recently just started loving football again,” Jones said. “There is a new energy with our team this year. I never would quit or give up, but we just weren’t in a good spot last year.”

Now, Jones, who has been a team player by playing both the offensive and defensive line at the 6A level, is excited about his senior year. While a future with the Alabama Crimson Tide and playing for Nick Saban awaits, he’s actually able to focus on his senior season with many of the friends he grew up playing with.

“Coolest moment of my life”

Jones was quickly on the national radar as a top recruit in the country after the impact he was making at a young age, and one moment at the Alabama camp during the summer of 2017.

After putting forth a great showing at the University of Georgia’s summer camp on June 1, Jones traveled to Tuscaloosa to take part in Alabama’s camp, which created a life-changing moment.

“I did really well at that camp, and beat some of the guys that are now there,” Jones said.

He then recalled that before going to work out a guy came up to him saying head coach Nick Saban wanted to see him.

“I was like ‘Did I get in trouble or something?’” Jones said grinning. “I was preparing an apology and everything. When I got there, he said ‘Come on in, sit down.’ Then he pushed that little button on his desk to close his door and I thought ‘Oh yeah, it’s over for now, I’m done for.’”

Instead, Saban sat across from Jones and told him how well he did in the camp and that he would be keeping an eye on him and his film throughout the season.

It was a surreal moment for a young Jones who thought playing for a guy like Saban and a program like Saban was only a dream.

“When he said that, I was like wait a second, did he just say he wanted me on his team?” Jones said. “I thought it was supposed to be the other way around. I was stuck and couldn’t even think.

“That was easily one of the coolest moments of my life. I will always remember that.”

Following his dominant sophomore season, Jones starting getting official offers from Georgia, Alabama and others, as he quickly became one of the most coveted players.

“At first it was like ‘Oh my God, I can’t believe this,’” Jones said. “Especially when Alabama offered. I was in another dimension then. But as it kept going on and kept going, it was just another offer. I tried not to think about it too much because I know all of it can be taken away at any minute.”

But that didn’t keep Jones from realizing what he has accomplished already in life—something many saw the potential for when he was a kid.

“When we were kids playing in little league, people used to joke around that we would make it big one day,” Jones said. “But I never thought this would happen. I never thought I would be getting offers from Alabama or Auburn.”

Eventually, Jones chose to commit to Alabama because of the opportunity it provided and the relationships he had built, especially with Saban.

“I’m realistic and I know how important education is,” Jones said. “I will always focus on that, but committing to Alabama was almost a business decision. I have a chance, even if the odds aren’t high, to play highly in this sport, and Alabama is the place that can help me get to the next level.”

Jones knows it will be a major challenge, and that he’ll face plenty of hurdles as he did during his freshman season battling against upperclassmen trying to beat every one of them.

“I have to become smarter, faster and stronger,” he said. “I know it’s going to be a fight every day.”

But before that fight begins, he knows he has one last chance to prepare for that day as he looks to help the Calera Eagles put together a winning season one last time in 2019.

The past is the past

Following last year’s 1-9 overall record, which included a 1-4 mark in region play in Calera’s first year in Class 6A, many don’t expect them to compete this season, but this is a different team that actually wants to be on the field.

“We’re not going 1-9 again this season,” Jones said. “I’m really confident in our team. If everyone does their part and focuses on that only we will have a very stable offense and a phenomenal defense.”

Jones said he hopes the Eagles can go 10-0 with a deep playoff run, but expects the Eagles to at least be in the postseason this year.

“We have way better team chemistry this year than we did last year,” Jones said. “Honestly, I feel like we can beat the crap out of a lot of teams this year if we stick to what we do best.”

If there is anything Jones has proven on his journey it’s that he doesn’t like to lose and he doesn’t mind bouncing back. Whether it be from his battles with upperclassmen as a freshman or his two stints of losing passion for the game, Jones always got back up, and he’ll do so again with his teammates in 2019.