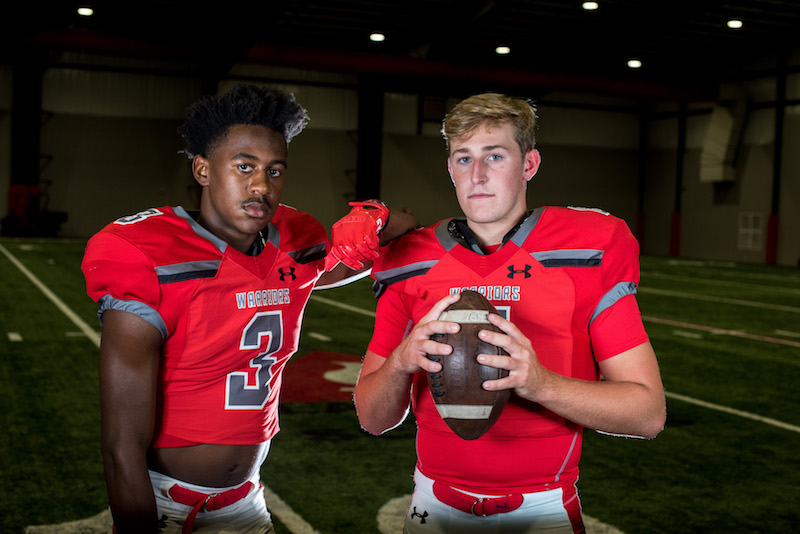 Quarterbacking the red team was Michael Pettway and quarterbacking the black team was Sawyer Pate, the two pitted against one another as opponents hoping to take the other down in Alabaster’s city football league.

Now, nine years later, the two have joined forces and instead of looking across the sideline at one another as opponents, Pate will take snaps as the Warriors’ starting quarterback and survey the field for his good friend and leading Thompson receiver Pettway.

The two seniors have grown up in Alabaster, and will now head into their senior seasons as starters together for the first time at the varsity level.

Pettway returns as the team’s leading receiver, and will try to help Pate come along in his first full year as a starter looking to replace All-State quarterback Taulia Tagovailoa, who is now at the Univeristy of Alabama.

They have big shoes to fill if they want to help Thompson maintain the success it has seen the last two seasons with appearances in the semifinals each year and a berth in the Class 7A State Championship game last year for the first time since 1982.

But wearing the passion of an entire city on their sleeves, Pate and Pettway are determined to make this season the most special season in school history.

“We want to prove to people that we aren’t the old Thompson, and that just because we lost all of these big players we are still just as good as we have been the last few years,” Pettway said. 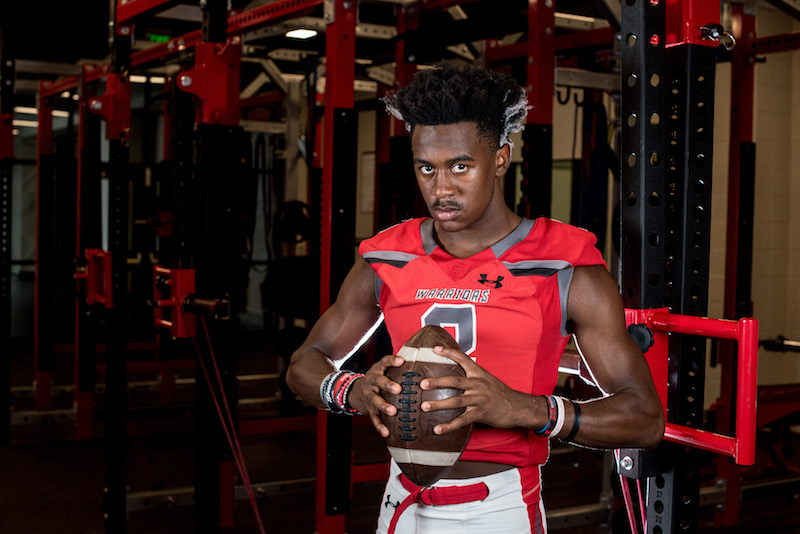 When they do step on the field together this season, Pettway will return as the team’s leading receiver having posted 1,208 yards and 17 touchdowns last season, while Pate will step into his first season as a starter at quarterback.

The connection between the two, however, goes back much further than that to when each was playing youth football.

Both started playing the sport around the kindergarten-first grade time frame after their parents signed them up, but it was third grade where they really got there first glimpse at each other.

The two didn’t play against each other very often, but the competition was there regardless.

“We are really big competitors and like to compete,” Pate said. “I think that’s healthy. He’s a great guy and we’ve taught each other things and have built on each of the lessons. That’s what’s helped us be great.”

“It’s crazy. Even when we were battling for the job, we were always like brothers,” Pettway said. “Now that I’m at receiver, we still have that close connection.”

There was some hesitation from Pettway, however, who thought seriously about quitting football altogether after his eighth grade year so he could focus on basketball.

“Coach (Mark) Freeman persuaded me to give football another try,” Pettway said.  “That’s when I fell in love with playing football.”

Pettway went on to get great playing time during his sophomore year, before eventually becoming a full-time starter during his junior season where he went on to become the second leading receiver in Thompson football history.

“Growing up I loved basketball and had dreams of going to the NBA,” Pettway said. “It may sound crazy, but that was bigger than football and the NFL to me. Somehow God just turned it around.”

Pettway has now admitted to liking the receiver position more than the quarterback position, and during his senior season, he’ll have the opportunity to help Pate make a name for himself. 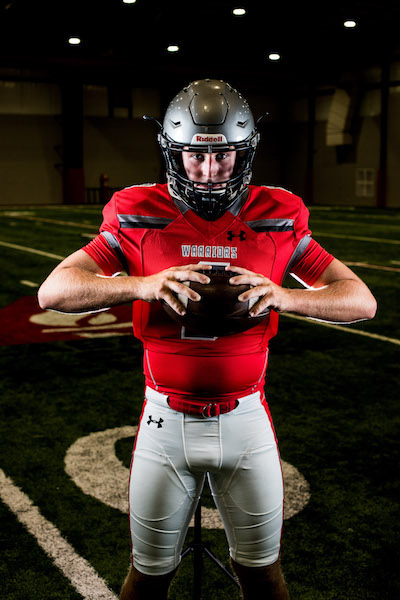 While Pate eventually won the starting quarterback job going into high school, a star playmaker by the name of Taulia Tagovailoa shook things up with his move from Hawaii after his brother enrolled at the University of Alabama.

Tagovailoa immediately became a starter in his first year as a junior and went on to set school and state records at the position each of the last two years; and while many might have felt sorry for a guy like Pate having to wait even longer for his opportunity, he’s the first to tell you that was the best thing that could have happened.

“He took me under his wing,” Pate said. “He brought me everywhere and taught me a ton about the game and how to be a better leader.”

When Tagovailoa first arrived, Pate didn’t really know what to expect, but it quickly made him realize it was time to up his game.

“I was expecting some big 6-3 guy, but he was just a little chubby kid when he first got here.” Pate said through laughter. “Then I saw him play and was like ‘wow.’ He could really throw it. That and his football IQ is out the door. He knows so much about the game.

“It was at that time that I realized this dude is that much better and I really have to work my butt off to try and come close to his ability. Ever since he got there, I’ve worked harder and harder to try and get better and be better than him. We’re different quarterbacks, but I’ve tried to use what he did to help improve my game.”

After two years of waiting behind a star player, Pate is ready to step into the spotlight and shock a lot of people that may expect a drop off in quarterback play at Thompson.

Now that both Pate and Pettway have followed different paths to their senior year at Thompson High School, they come together for one last ride to try and keep the team rolling in the right direction after two successful seasons in a row.

Last year, the team experienced historic accomplishments by making it to their first state championship game since 1982, but they didn’t win, nor did they bring their best effort, which has in turn inspired Pate and Pettway to both help bring that feeling back for the 2019 season.

“We expect to be back in the state championship,” Pettway said. “We just have to take it one game at a time and not get ahead of ourselves.”

That 52-7 thumping to Central-Phenix City in last year’s title game didn’t match the talent Thompson had, nor the historic season it had brought the city, but it did have some hidden elements of positivity.

For one, with Tagovailoa uncertain for the game due to injury, Pate got a lot of the first-team reps in practice that week and played for the majority of the game, gaining valuable experience in one of the team’s biggest games.

“I went to school and then practice and then watched film and more film and film,” Pate said of his routine that week before the game. “I learned their defense and the plays we were going to scheme. It was stressful because we wanted to have answers for them, but had a couple of our key guys hurt. I think we came in a little too relaxed. We were tight and nervous. It’s a game I can’t really explain. It just wasn’t our time. We weren’t due that day.”

The other blessing in disguise aside from Pate being throw into the fire against the best team in the state was the desire to keep that from happening again.

“I think that game made me and my teammates hungry,” Pate said. “We’re just ready to get back out there and start winning games again. We’re ready to show it and have fun this season.”

“It was heartbreaking at first, and kind of still is, but we leave it in the past,” Pettway said. “We don’t talk about it much anymore. We used to say ‘52-7 never again,’ and now we don’t talk about it. It’s just motivation in our minds. We realize what happened, and we know what we need to do and that’s focus on this season and getting better to keep that from happening again.

“I’m really excited. Most excited I’ve ever been. I’m ready to be back on that field proving to people all the hard work we have done.”

With close to 15 new players on both sides of the ball, there will be a transition period, but this is by no means set up to be a re-building year for the Warriors.

“I have all of the confidence in the world in this offense,” Pate said. “We have a ton of playmakers that are putting in the work. They’re getting better and they’re hungry. We want to get back on the field and prove that we are a state championship team.”

All in for Alabaster

Since their days of playing quarterback for the Red and Black teams, Pate and Pettway have represented the city of Alabaster bleeding the Thompson red and black, now going into their final season, they hope they can give the city one final special run.

“Being the only person from Red team that I was on that is still here, it means a lot going into my senior season,” Pettway said. “Especially now with the community knowing that we are better than what we were. We have high expectations and don’t want to go back to the way things were for so long here.”

Pettway said that special bond with his teammates and the city is what made him fall back in love with the game.

“It all pushes me to be better and you feed off of that,” he said. “You want to be the best. Seeing how much Thompson was struggling, the group of guys in my grade wanted to be that group that led Thompson to a winning season and got Thompson back on the map.”

In last year’s championship game, Alabaster’s desire to see a winning football team and support Thompson was evident by the way the fans traveled to fill up Auburn’s Jordan-Hare Stadium.

“Seeing all of the fans there was unbelievable,” Pate said. “Seeing an SEC stadium almost packed with fans on a cold night was great. We owe it to them not to take a step back. They’ve waited long enough to have a good football team.”

And while the team has been put back on the map over the last two years, the Warriors still covet a state championship, and if Pate and Pettway can lead Thompson to that grace, they’ll forever be known as hometown heroes.