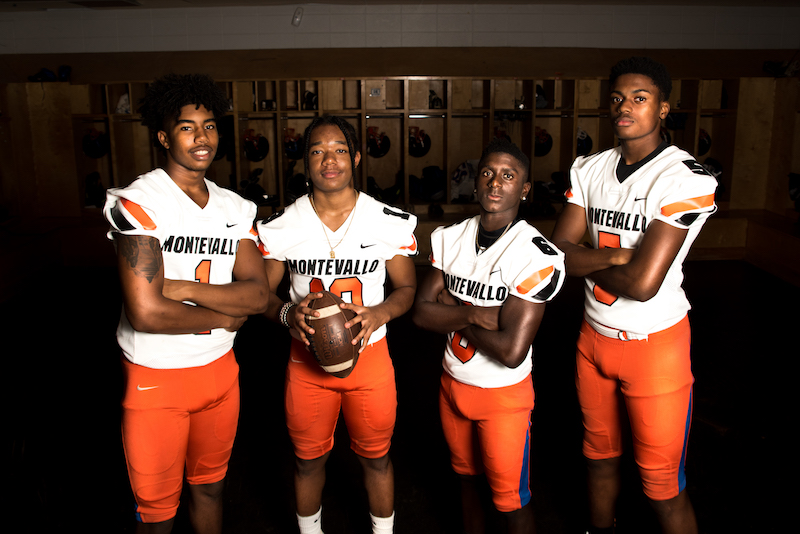 Dynamic duos have become more common, and even triple threats, but a quadruple threat is rare, and something the Montevallo Bulldogs are poised to unleash during the upcoming 2019 football season.

With the return of All-State quarterback Malik Inabinette, All-State receiver J.J. Evans, a dominant running back in Deon Gilliland and a receiver with breakout potential in Jamarius Carter, the Bulldogs could build off of last year’s successful offensive season by becoming the best offense in the state.

“I know we’re going to put a lot of points on the board, but it’s going to be important for us to bond as a team and rely on one another on both sides of the ball,” Evans said. “I want us to compete with everyone, and I think we can do that.”

Heading into this season, that confidence boasted by Evans isn’t outlandish, it’s the expectation. Not only does every player on the team believe that, but they expect to be even better than last year.

Each of those four senior leaders, however, knows how vital of a role they have to play in helping that come to fruition, rather than ending their season in the first round of the playoffs scoring just eight points as they did last year.

Having played together since they were six years old, each one plans to put it all on the line every day this fall so they can end with a special run and have memories to share for a lifetime as four best friends who left a memorable mark on a program as the quadruple threat.

“We’ve known each other forever,” Evans said. “We give each other a hard time every day, but at the end of the day we are brothers and this will be a special year.” 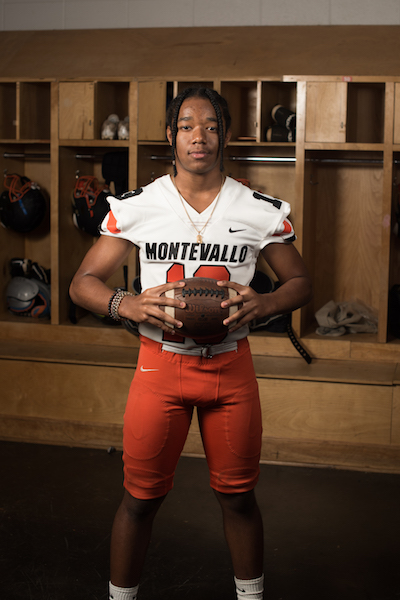 As is the case with every offense, the most important position aside from those blocking is that of the field general at quarterback, something Inabinette takes seriously.

“I have to play a huge leadership role this season,” Inabinette said. “I need to be able to evaluate my teammates around me and see what they need. I have to bring that mentality to the table for us to be successful.”

If he’s able to improve in that role, he will pair it with the talent of being the state’s best returning quarterback.

During his junior season, Inabinette threw for 3,376 yards, which led the state finishing with more passing yards than current Alabama quarterbacks Taulia Tagovailoa and Paul Tyson and current Auburn quarterback Bo Nix in the same season. He also posted 38 touchdowns and threw for 400-plus yards in three different games.

It’s scary that he hadn’t reached his full potential and still put up those numbers, but now, heading into his senior season, Inabinette has more confidence and understands more about how to be successful at the position.

“I’ve grown a lot of confidence,” he said. “I have a better understanding of what the defense is thinking and trust in my teammates around me. I’m not scared or nervous because of who I’m around and my experience.”

But that poise didn’t come over night.

The summer before his junior season, Inabinette and the Montevallo offense struggled with growing pains. Head coach Brandon Wilcox recalled a 7-on-7 event where the team scored no points in three games and was the worst offense in attendance.

But with work and forming team chemistry that quickly changed.

“Last year was his first year as a signal caller,” Wilcox said. “From game one to game 11, he was the most improved player and showed what we expected from him. Now, he’ll come in with more confidence and already has great composure.”

For the senior quarterback, it was game one a season ago where he truly started to believe in himself and the team.

“It really started the first game,” Inabinette said. “At first we started out kind of slow, but then we started kicking it up, and then I realized the potential we had on the offensive side.”

That’s what kick-started a special 9-1 regular season, but injuries got to Inabinette near the end of the season, which caused the Bulldogs to make changes on the fly and led to the difficult ending to the year.

“We don’t want to come up short again,” Inabinette said. “Last year, we thought we were good enough to go all the way to the state championship. Now it’s our last year together and we’ve put in so much work together. We don’t want to see that happen again.” 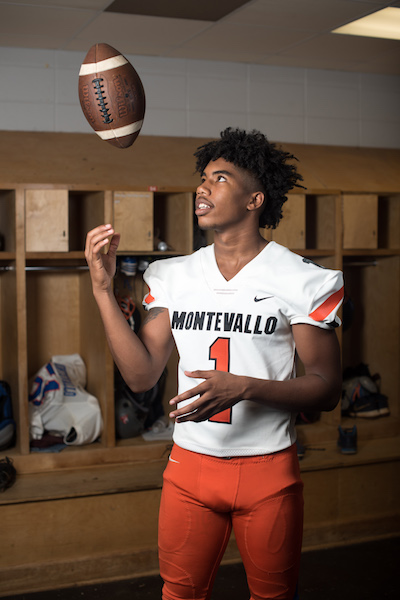 One of the reasons Inabinette’s confidence is so high is because of the talent he has to throw to with Evans, Carter and Kial Cottingham all out wide, but it of course starts with Evans, who had a historic season in 2018.

As an All-State receiver, Evans posted 1,706 receiving yards, which ranks second all-time in the state’s history by just 29 yards. He also posted 18 touchdowns and became a highly-touted recruit in the country, who is now committed to Auburn University.

Having fought through a battle of loving the game again after seeing his father pass away as a kid, Evans has made the most of his opportunity and is primed for another special season with so much talent around him.

“I automatically have to step up and be a team leader and captain,” Evans said. “I have to set an example for the younger guys. I also have to step up myself. Just because I had a great year doesn’t mean I don’t want to get better. I want to be able to read the defense automatically this season and continue to make big plays for my team. If they need me, I want to be there for them.”

During the spring, Evans and Inabinette trained almost every day to work on getting better, and already close, the two share a connection where they can just look at each other and know what they want to do.

Evans has also worked on reading defenses to know where to go, especially with the threat of double and triple teams this entire season.

“Playing at quarterback some late last year when Malik got hurt, and doing it again in 7-on-7 this summer, I’m getting to learn a lot about reading the defenses, which is going to help me be a better receiver and overall player,” he said. “I need to be able to do that at every position, so it’s a good skill to add.”

While redemption is on each of their minds, Evans knows that this is his last chance to step on the field with some of his best friends, and he wants to make the most of that in addition to improving his game.

“A lot of people say high school is the most fun you’ll have playing football,” Evans said. “I’ll never forget this brotherly love. It’s going to hurt when this season ends. I’m ready for the next level, but I’ll miss playing with these guys.” 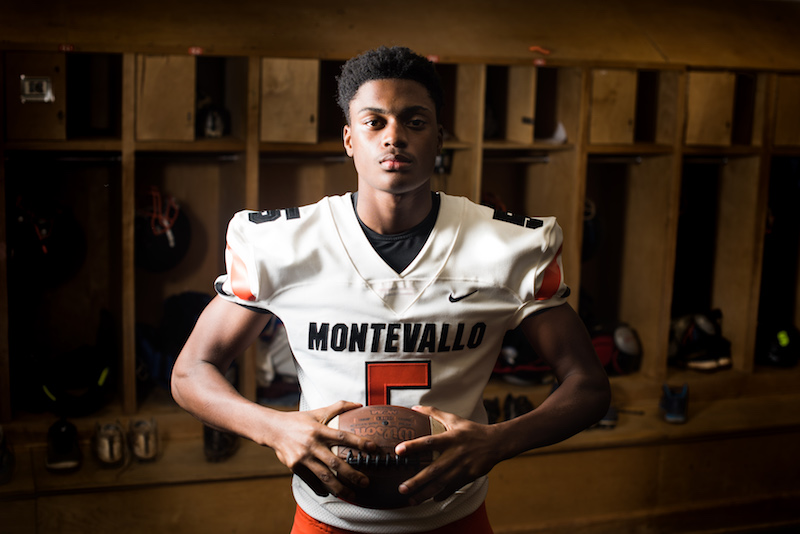 Standing at 6-foot-5, 200 pounds, Carter shouldn’t fly under the radar, but he will going into his senior season due to Evans’ being the focus of every defense.

After not playing as a sophomore, Carter re-joined the team last year and posted 17 receptions for 255 yards and six touchdowns in basically half a season. With Evans expected to get so much attention this year, Carter knows he can have a breakout season because of his size in single-cover situation.

“I feel like DBs are all smaller and not tall enough anymore,” he said. “That tends to create a mismatch, especially when you have such a good quarterback that can throw the ball and put it right on the spot.”

It’s not that he doesn’t think there are good cornerbacks out there that can play the position, but it’s his confidence in the work he’s put in and the team he has around him.

“J.J. and I stayed after school almost every day during the spring to work with Malik,” he said. “I’ve been working on my footwork and route running and have met with a trainer, who has helped a lot.”

After playing with his teammates since city league, Carter lost his love for the game for a short while and wasn’t ready to put that kind of work in early in his high school days. But going into his junior year, he started missing it.

“I really missed the games and the environment of it all,” Carter said. “But most importantly, I missed playing with everybody and wanted to be with them. Now, I want to work hard, believe in my teammates, be a leader be coachable and give 100-percent effort.”

Coming back, he was ready to grow and do what it took to improve for himself and the team, which quickly led to a spot in the starting lineup midway through his junior season, and now he’s emerged as a playmaker that could have a breakout year for the Bulldogs.

“My game has grown a lot since starting during the middle of the season last year,” Carter said. “Now I get to start from beginning to end.” 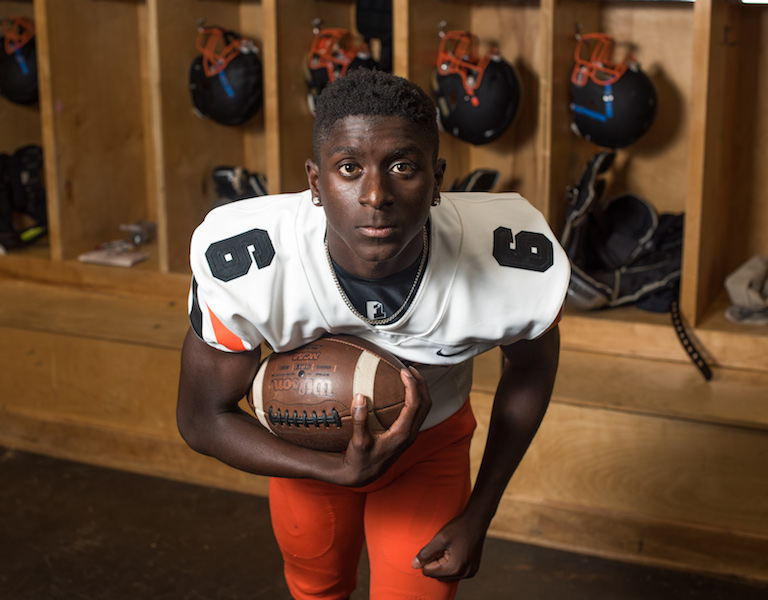 The key to any successful offense is balance. A heavy dose of passing and teams will sellout to stop the air attack. A heavy dose of running and they’ll do the same to stop the run. But having a balance of both creates a two-headed monster that completes any prosperous offense.

While attention will be given to the state’s leading returner at quarterback and receiver, if too much focus is on them, Gilliland will make them pay as a returning running back who ran for 1,088 yards and 13 touchdowns last year, while also adding 335 receiving yards.

It also doesn’t hurt that he has the mindset of finding the end zone on every play.

“If I know I’m getting the ball, I picture getting a touchdown,” Gilliland said.

What’s most impressive about the back is the power he runs with for being 5-foot-8, 160 pounds. Last year, he posted 15 2-point conversions because he was able to power his way into the end zone, and he seemed to be able to keep a low center of gravity and run through tackles in the open field or at the line all season.

“I get my power from watching other backs play at every level,” he said. “I try to stay low and keep my feet moving. Working hard in the weight room is also key.”

Gilliland knows he’ll have the opportunity to do that again this year and could be poised for a big season because of all the focus the passing game will get.

“The passing game helps clear up space and a lot of times gives me just one guy to have to beat,” he said. “I know if that happens, I have to make something happens.”

His confidence has also grown at the position thanks to experience.

“I’ve learned a lot,” Gilliland said. “A lot of times I was just going for the hole, but now I understand where I need to go. Trusting my teammates and reading the blocks will determine how good I can be.”

Like the other three of the quadruple threat, this season will mean just a little bit more than stepping on the football field trying to win a championship. It marks one final memory to create with his brothers.

“It’s going to be tough,” Gilliland said of his final season with his teammates and friends. “Growing up with these guys, they’re like brothers. I’m probably going to cry when the season ends. Playing together, I trust them. I’m not sure I’ll ever gain that kind of trust with anybody else.”