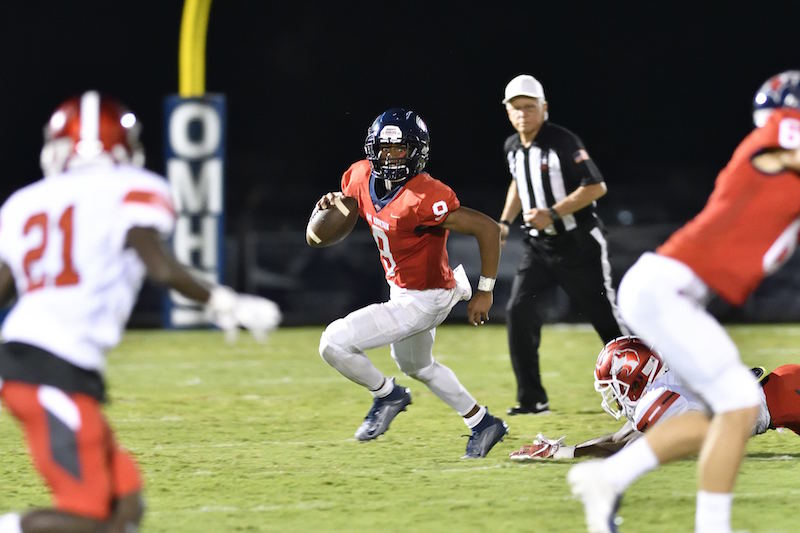 Oak Mountain will host Thompson in this week's Game of the Week. (For the Reporter/Barry Clemmons)

After a sluggish start picking games this season, it turns out I was just waiting for the excitement of region play. Now that we are back on track and have a good feel for each team, it’s time to get ready for the second week of region action this week, including a big in-county matchup and another Thursday night game.

Last week, out of 12 games played featuring county teams, only four picked up wins during the first week of region action and the third week of the season.

With several teams needing a big bounce back to avoid a 0-2 start in region play, we’ll give you a preview of what to expect in each of the 11 games we have taking place this Friday in our predictions below.

Game of the Week: Oak Mountain vs. Thompson

While Thompson is coming off a boisterous 48-30 win over top-ranked Hoover, a matchup with the Oak Mountain Eagles is probably the one he wanted the least this week. One of the toughest offenses to prepare for with their option attack, the Eagles are coming off a 50-33 loss to Hewitt-Trussville but were within five points heading to the final quarter.

While the Warriors are 3-0 and Oak Mountain sits at 1-1, preparing for the Eagles’ offensive style in one week’s time, particularly off an emotional win, is so difficult because it’s not something you prepare for on a weekly basis. Last year, we saw this game remain close up until the final quarter of a 35-21 win for Thompson, and this year should be similar.

Thompson, however, has too much firepower against an Oak Mountain defense that just gave up 50 points to Hewitt. With the Warriors having scored 40 or more points in their first three games for a combined 132 and an average of 43.3 per game, it will be difficult for the Eagles to keep up. Their offense will make it close for a while, particularly because of running backs Judah Tait and Jonathan Bennett. Those two combined for 300-plus rushing yards last week, while the Warriors struggled to stop the Hoover rushing attack. That combined with the emotional win for Thompson last week will make it interesting for a while, but the Warriors should pull away late. Thompson 42, Oak Mountain 21

Spain Park is now off to a 1-2 start after the loss to Bessemer City two weeks ago and now a blowout loss to Vestavia Hills, 45-7, this past Friday night. While it’s easy to sulk, this game can be a difference maker in the Jaguars’ season. Mountain Brook is 3-0 and giving up just 11 points per game, but the Spartans are coming off just a 10-point, 31-21, win against Tuscaloosa County. Spain Park is just as good a competitor as TCHS if not better. Honestly, I think the Jags have the better talent, specifically on offense, in this matchup. But what it will come down to is a young defense stepping up to make plays after struggling a week ago. Spain Park is giving up 40 points per game right now, which won’t cut it. Right now, that will be the difference, but turning it around this week would likely lead to a win. Spain Park 24, Mountain Brook 35

The Chelsea Hornets won just two games all of last year, but just three weeks into the 2019 season, they’ve already matched that with two consecutive wins the last two weeks over Briarwood and Carver-Birmingham. Now, the Hornets are in prime position to make it three consecutive wins with a matchup against a reeling Jackson-Olin team. The Mustangs’ only win is a two-point victory over Fairfield in week one. Since, they have lost the last two weeks 20-8 and 38-12. Going up against a Chelsea defense that is giving up just 13.7 points per game and has yet to give up more than 17, that doesn’t bode well for Jackson-Olin. The question still remains the Chelsea offense. Collier Blair showed his ability with 100-plus rushing yards and two touchdowns last week, but can this offense produce against a defense with SEC talent. I think with the way their defense is playing, the Hornets won’t have to score a ton of points, which helps, but they still need to take strides in the right direction this week. Chelsea 20, Jackson-Olin 13

Helena will get possibly the biggest game of the season coming off a bye week. If the Huskies can down the Patriots, there isn’t a game left on the schedule they can’t win. Two weeks ago, Helena fell 32-24 to No. 5 Hueytown, but Homewood also started the season with a loss to Hueytown by a final of 32-19. That tells me both teams are pretty evenly matched this season and whoever makes the least mistakes will win. First-half mistakes cost the Huskies against Hueytown, but if they play like they did in the second half as well as the opener against McAdory, they can be one of the best teams in the 6A classification. I think their experience defensively will be the difference, while the offense can do just enough on the ground. Helena 24, Homewood 21

Since their 27-0 first half against Pelham to start the season, Calera has been outscored 82-28 and is now 1-2 on the season. This week is the week to turn that around. The Eagles are better than last year’s 1-9 team and need to show it this week. Stanhope Elmore is a talented team and is now 2-1 after a 12-7 win against Benjamin Russell, but their offense hasn’t played great at just 12 points per game through three games. This Calera defense is more than talented enough to keep the Mustangs from running away, but the offense has to play mistake-free football. Last week, early mistakes cost them, and now I need to see them prove they can win a game to give me the confidence back I should have in them. Calera 13, Stanhope Elmore 21

The Pelham Panthers are now 0-3 with three straight home losses to start the 2019 season after last week’s 42-21 loss to Homewood. It was mistakes early that put them behind 22-0 in the first few minutes, and they never could recover. Now they get a Minor team that is 1-2 with losses to Ramsay and Paul Bryant and a win over Jackson-Olin. Neither team is scoring more than 20 points per game, so I don’t see the Tigers pulling away in this game, but they are giving up just 16.3 points per game, while a young Pelham team is giving up 29.3 per game. Pelham 17, Minor 21

Briarwood may be 0-2 on the season, but it’s still a team that shouldn’t be forgotten about in the 5A classification. Both losses have come by 12 points or less to good teams. Now, the Lions get a chance to gain some confidence against a Woodlawn team that has lost the last two weeks by a combined 106-0. The Lions should be able to pull away easily in this one to get confidence ahead of two tough matchups in a row against Wenonah and Hartselle the following two weeks. Briarwood 42, Woodlawn 7

Many look at the Shelby County Wildcats and see a 0-3 team, but if you look closely enough, you’ll see a team that is on the verge after three straight losses by eight points or less to start the season. This past week, it was a comeback attempt that came up just short in a 40-33 loss to Chilton County. The problem is the defense is giving up 39.3 points per game, which makes the offense’s production of 32.3 points per game not matter. This week, the Wildcats get a Bibb County team that is 3-0, but has yet to score more than 19 points in a game. It’s a matchup Shelby County’s defense has to show up in because it will be one of the toughest teams for the Wildcats to score on. Shelby County 14, Bibb County 28

After a 48-14 loss to open the season, Montevallo has responded with a combined 104 points the last two weeks to improve to 2-1. Now the Bulldogs get a Jemison team that is coming off a 41-17 loss to Central-Tuscaloosa, which shows the Panthers are susceptible to giving up points. Problem is, so is Montevallo. The Bulldogs have given up 122 points through three weeks defensively. That adds up to a high-scoring game, but I’ll take Montevallo in a back-and-forth game any day of the week with the talent they have on that side of the ball. Montevallo 49, Jemison 42

Now 0-3 on the season, Cornerstone will take on No. 4 Chambers Academy this week after a 44-0 loss to No. 10 Crenshaw last week. It’s hard to see the Chargers bouncing back after that. Cornerstone 7, Chambers 45

Evangel got to compete in its first 8-man game of the season last week, and we finally saw why the Lightning are so scary this year on offense with an 82-55 victory. This week, they’ll take on a Freedom team that is coming off back-to-back losses by a combined 98-28. Evangel 55, Freedom 27