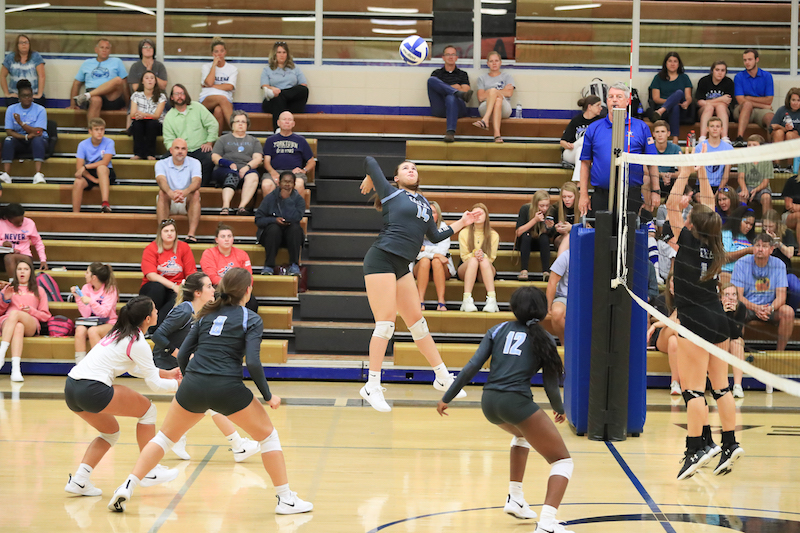 The Calera Eagles took down the Montevallo Bulldogs in four tightly-contested sets on Thursday, Sept. 12. (For the Reporter/Dawn Harrison)

CALERA – Both the Calera and Montevallo volleyball teams had found recent success heading into a matchup against one another on Thursday, Sept. 12, with the Eagles having won five of their last six matches and the Bulldogs having won four of their last six, which led to a compelling county battle between the two.

In that opening set, Montevallo had shown it could keep up with the Eagles, who have had an impressive start to the season with their only losses coming to ranked opponents thus far.

But the Bulldogs had also played a difficult schedule and were more than ready for the challenge.

In a back-and-forth opening set, Montevallo was able to make the late plays to pull away for the 25-21 set victory and a 1-0 lead.

That gave the Bulldogs the confidence they needed moving forward, which led to another highly competitive second set. Again, it was a back-and-forth set that saw Montevallo make several plays throughout, but with momentum shifting sides several times, it was Calera who made the final two plays of the set.

Tied at 24-24, Montevallo found itself with a great opportunity to go up 2-0 in the match, but the Eagles put together two great points to pull out the set by a score of 26-24 to not only even the match, but turn the momentum in their favor moving forward.

Calera took advantage of that emotional shift in the match during the third set.

But the Eagles never could fully leave the Bulldogs in the dust. Montevallo fought and was scrappy throughout, but just couldn’t make the plays late for the second set in a row as Calera pulled out the third set 25-20 to take a 2-1 advantage.

In the final set, the tight battle continued with the fourth consecutive set decided by five points or less.

Despite being down 2-1 and forced to win two consecutive sets to pull off the match, Montevallo continued its impressive effort in the fourth set, which led to another incredible showdown.

But for the third set in a row, Calera was able to make the plays down the stretch needed to win. Up 24-22, the Eagles were able to close out match point for a 25-22 set win and a 3-1 victory over the Bulldogs.