HOOVER – A 34-year-old Gardendale woman was arrested and charged with domestic violence after allegedly stabbing her ex-boyfriend as he made a food delivery in Hoover. 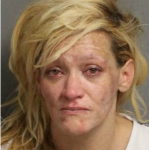 At 8:34 p.m. on Wednesday, Sept. 11, Hoover police and fire responded to the parking lot of 700 Riverchase Apartments on a report of a stabbing, according to a news release from Hoover Police Department.

“Officers arrived to find a 37-year-old male lying on a sidewalk with a small puncture wound to his chest,” the release stated. “He was transported to Princeton Baptist Medical Center, where he was treated and released.

“The victim told officers he was making a food delivery for Postmates with his ex-girlfriend when they got into an argument. During the argument, the female stabbed him with a switchblade style knife. She was located on the scene and was taken into custody without incident. A knife matching the description given by the victim was also recovered.”

Michelle Diane Logan has been charged with second-degree domestic violence and is being held on $10,000 bond.

She will be transferred from the Hoover City Jail to the Shelby County Jail.