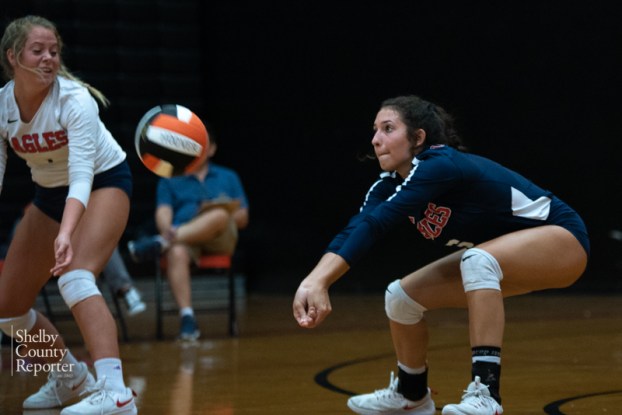 The Oak Mountain Eagles dropped their first area matchup of the 2019 volleyball season, but responded with a win over Ramsay on Thursday, Sept. 12. (Reporter photo/Keith McCoy)

Despite falling in their first area match against the Hoover Buccaneers just two days earlier, the Oak Mountain Eagles bounced back with a win over the always talented Ramsay Rams at home on Thursday, Sept. 12, thanks to a 3-0 sweep.

Competing in an area that also features No. 4 Thompson, it was a tough loss for the Eagles, but they’ll still have a couple of big chances at area wins with matchups against Thompson and Tuscaloosa County still remaining.

And with a confidence boosting win against Ramsay two days later to get back on track, Oak Mountain improved to 14-3 on the season with their only losses coming to other ranked opponents.

Against the Rams, Oak Mountain showed what has made them such a successful team to this point in the season with a straight-set victory featuring set wins of 25-15, 25-7 and 25-12.

It marked the second win of the season over Ramsay for the Eagles, after also beating the Rams two weeks ago by a final score of 2-1.

Coming into the matchup, Oak Mountain was determined to get back on the winning track with several of its most difficult matches and tournaments still ahead.

The Eagles showed that determination in the first set and took control early. They went on to pull away down the stretch for a 10-point 25-15 opening-set victory to take a 1-0 lead.

Seeing a win again just put the confidence right back into the Oak Mountain team, which made the second set a formality. The Eagles knew they were where they wanted to be and went on to pull away for a dominant 25-7 victory in the set for a 2-0 advantage.

With Ramsay now forced to win three consecutive sets after losing two in a row in dominant fashion, it was tough for the Rams to bounce back in the third set, which led to Oak Mountain pulling away again for another 25-12 victory to close out the 3-0 sweep.