Stanhope Elmore pulls away from Calera 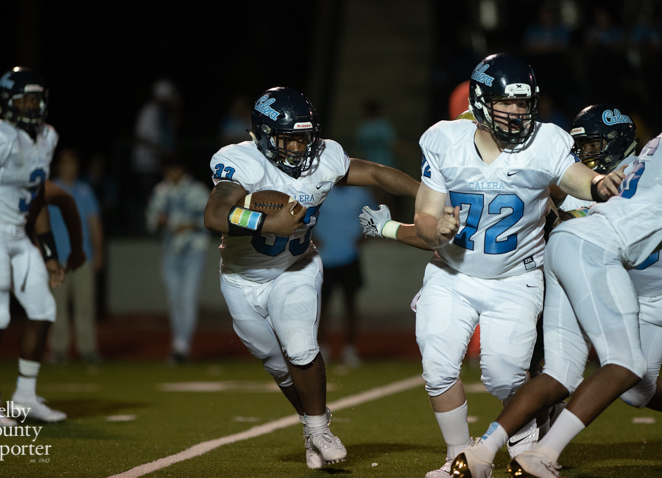 The Calera Eagles were unable to keep up with Stanhope-Elmore on Friday, Sept. 13, losing their third consecutive game following a 1-0 start. (File)

CALERA – Freshman running back Antonio Trone rushed for a pair of touchdowns in the fourth quarter as visiting Stanhope Elmore pulled away for a 42-15 victory over Calera in a region game for both teams.

Calera held the Mustangs scoreless in the third quarter and trailed by one possession heading into the final quarter. The Eagles punted the ball to the Mustangs with just over 10 minutes remaining. With the ball on their own 30-yard line, senior quarterback Andrew Rines almost rushed all the way for a touchdown, but was tripped up by the Eagles’ De’Javius Williams at the 2-yard line. Trone ran the ball in on the next play for a 30-15 lead.

On the ensuing possession, aided by an unsportsmanlike conduct penalty, the Eagles had the ball at their own 42-yard line. Senior quarterback Quin’Darius Crews threw a pass that was intercepted by Mustangs senior Jeremy Thompson and returned 80 yards for a touchdown. The PAT kick was missed to make it a 36-15 game.

Calera returned the kickoff to their own 40-yard line but fumbled the ball away on their first play of the possession. Trone picked up 5 yards on his first rush, then broke into the clear for a 48-yard run to close out the scoring.

“The first half we played 22 great minutes, keeping it at a one possession game.” head coach Trey Simpson said. “A turnover and blocked punt turned into 14 quick points. The third quarter was the best we’ve played all year, but a couple of turnovers and miscues and it got away from us. At times you see a glimpse of us being a very good football team, we just need to be more consistent. I’m proud of the effort, we just have to keep working.”

The Mustangs scored on their next possession. Senior quarterback Andrew Rines closed out a 6-play, 79-yard drive with an 11-yard scoring toss to senior Conner Bradford to tie the game at 7-7.

The Eagles were pinned deep in their end to start their next drive. A pass was intercepted by junior Anthony Toby to give the Mustangs the ball at the Eagles’ 14-yard line. Rines recovered an errant snap at the Calera 28-yard line and on the next play advanced the ball on a run back to the 13-yard line. Senior kicker Dylan Presciti connected on a 30-yard field goal for a 10-7 Stanhope lead.

Two Eagle miscues turned into touchdowns in the final 1:30 of the half. A blocked punt was recovered in the end zone by junior Harrison Carter for one score and a fumble led to a 1-yard scoring toss from Rines to Bradford, which made it a 23-7 lead at halftime.

Chelsea uses 6 rushing TDs to get past Jackson-Olin…