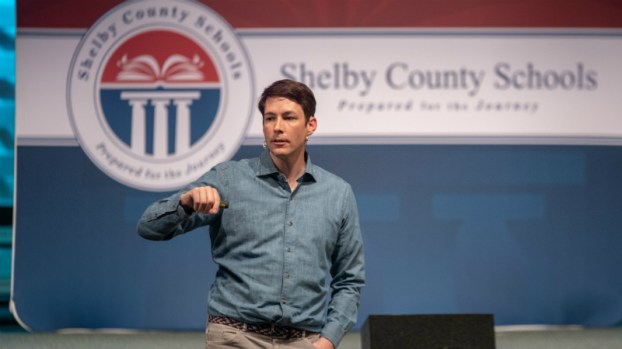 Students from across Shelby County learn leadership at conference

HOOVER – About 400 students from across Shelby County learned leadership lessons on Thursday, Sept. 12, that they can take back to benefit their schools and communities.

Kevin Scott, founder of the Chick-fil-A Leader Academy was asked questions from students in attendance, including whether he saw himself as a leader in high school and how to know if one is making the best choice as a leader.

“Being a leader does not mean your life is easier,” Scott said while also discussing the importance of having the humility to admit a mistake. “Being a leader means more responsibility and your decisions carry more weight.”

The conference’s beginnings date back to 2013, when Milton and eight members of the Oak Mountain School Student Government Association that he sponsors attended a leadership conference at Auburn University.

During the trip back home, the group discussed how they could capitalize on the things they learned and the momentum that was created.

They found that though there are a number of leadership programs in the Birmingham area, most of them are restrictive about how many people can attend.

The OMHS students wanted more than just the top few scholars at each school in Shelby County to be able to benefit from a conference, so they organized their own.

About $10,000 was collected in a couple of months, Valleydale Church was identified as a venue and 150-200 students attended the inaugural conference.

The Shelby County conference has been unique among school systems until this year, as St. Clair County copied the local blueprint.

“It’s kind of cool to see how our other program is influencing other school systems,” Milton said.

Though the Chick-fil-A Leader Academy is in more than 1,000 schools across the country, the SCS Leadership Conference is the only one in which it is a partner.

Jefferson State Community College is also a partner with SCS in making the conference happen.

The 400 students at the SCS Leadership Conference were from grades 8-12, representing every middle and high school in the school district.

HOOVER – Much has been accomplished in the Hoover City school district, but at a community meeting on Thursday, Sept.... read more