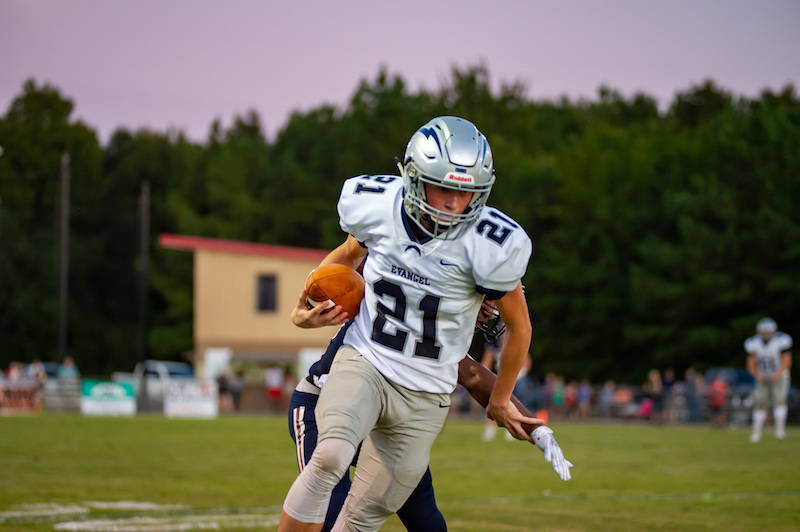 The Evangel Lightning picked up a dominant 70-14 victory over Freedom in an 8-man game on Friday, Sept. 13, to improve to 3-1. (For the Reporter/Larry Dancy)

“We started out so slow, but when we got in NASCAR set it took off. It was a barrage of points so fast. We went from 6-0 to 42-0 before even I could turn around. That’s the beauty and the ugly of 8-man football,” said ECS head coach Tim Smith. “I’m proud of how hard the kids played and kept their intensity up. It was a good win.”

Jett Lodge put Evangel on the board in the first quarter with a 33-yard touchdown catch from Tyler Henderson. It remained 6-0 through the first quarter, but Evangel scored five touchdowns in the second quarter for a 42-0 halftime lead, including a 35-yard punt return TD by Lodge.

Freedom broke its scoring drought by returning the second half kickoff for a touchdown.

Will Ferrell ran for a touchdown and caught three more as he racked up 144 yards of total offense (33 rushing, 111 receiving). Tyler Henderson was 11-of-16 passing for 154 yards in the win. Henderson also caught a 2-point pass on a wildcat formation play.

Noah Shears found the end zone twice, scoring from 2 and 26 yards out and finishing the night with 61 yards on 10 carries. Sophomore back Zhenya Stalligs had a 5-yard touchdown run.

In the fourth quarter, Andrew Stafford had a 55-yard pick six to cap Evangel’s scoring at 70 points. It was one of five takeaways, including four fumbles. Timothy Howard had a 42-yard fumble return to set up a touchdown, Riley Mason, Jahmad Quillman and Eli Whitfield each had fumble recoveries.

Howard had six tackles to lead ECS, Will Parker had five and Mason had 4. Andrew Stafford recorded three stops in limited time.

ECS (3-1) returns to AISA football on Friday when it travels to Edgewood Academy.