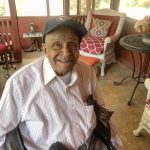 He is a World War II Navy veteran who somehow never managed to serve at sea.

After the war was over, White got to the business of living life and never made it to the ocean for pleasure.

This year, for his 103rd birthday, his family plans to correct that by taking him to Panama City to celebrate.

White remembers working with his mother, Emma Parker, at the old Shelby Hotel when he was a kid on the verge of being a teenager.

“The hotel was in bloom when we worked there,” White said. “I was just a little boy when I would go and help my mama, by mopping and stuff like that.”

He smiled big as he recounted the skills Mrs. Parker, the hotel cook, taught him in the kitchen.

These skills, which included how to prepare the possum and raccoon meat that Mr. Bristow and Mr. McClanahan provided for the kitchen, were skills that “took him far in life,” he said.

Several years later when he was a young man, he was drafted into the Navy during World War II.

One of 12 children, he told us he had three brothers who also served in other branches of the military.

White served in the Navy for two years and 25 days as a machine operator.

When asked about his time in the war, he grinned and said, “Well, it was nothing but a good time, and I did my duty!”

After the war, White worked in the ore mines and eventually had the opportunity to go to veterans school.

It was in school, through a good friend, that he met his wife of 70 years, Willie Love White. Together they raised five children.
He went on to spend 26 years working in a tunnel as a conveyor belt operator, crushing rock for Vulcan Materials.

White retired after putting in over two decades of work for Vulcan Materials.

“When he retired, he had earned the right to sit down and fish, and fish is what he did,” his daughter-in-law, Quilla White said.

White and his wife enjoyed years of fishing together during his retirement.

Quilla shared her thoughts on the remarkable man her father-in-law has been throughout his life.

She went on to tell us that he not only took care of and provided for his own family, but his community, too.

To this day he is still considered a deacon in Providence Baptist Church, where he served for most of his life.

“Back in the old days, before they had machines, my father-in-law and other deacons in his church dug graves by hand when it was needed and they never complained,” Mrs. White said.

These days, Mr. White attends Macedonia Baptist Church in Columbiana with his son and daughter-in-law.
After a nice afternoon chat with Mr. White, we asked him what he thought about visiting the beach for the very first time in his remarkably long life.