Hoover City Council, other meetings to move during renovations 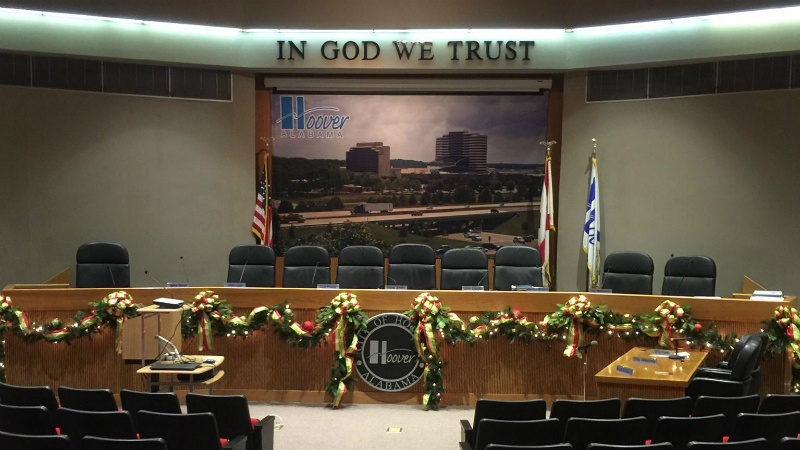 Hoover officials continue to find expenses that can be cut to balance a projected shortfall due to the COVID-19 pandemic. (FILE)

The Hoover Board of Zoning Adjustments, City Council, and Planning and Zoning Commission will meet at the Hoover Senior Center, after amendments to a city ordinance were approved by the Council at its meeting on Monday, Sept. 16.

The changes will begin with the next scheduled meetings. The meeting will return to City Hall at a date to be determined depending on the timeline of the work to be performed.

The Hoover Senior Center is located at 400 Municipal Drive.

The City Council meets the first and third Mondays of each month at 6 p.m., with work sessions at 5 p.m. on Thursdays prior to the meetings.

The Planning and Zoning Commission meets the second Monday of each month at 5:30 p.m., with work sessions at 5 p.m., prior to the meeting.

Also, the Hoover Arts Council’s meetings at 5 p.m. on the second Wednesday of each month will be moved from Hoover City Hall to the Hoover Public Library.

The changes will affect an upcoming Council meeting to discuss a budget proposed by Mayor Frank Brocato for the new fiscal year beginning Oct. 1.

Brocato presented the budget to the Council a few weeks ago and requested he and the Council meet to discuss any concerns and work through solutions.

City Clerk Wendy Dickerson will contact the Senior Center about availability to hold the meeting on Sept. 23 or Sept. 24.

Also at the Council meeting, Hoover officials recognized two police officers reaching milestones in their service to the city.

Harper was hired in September 1999 and has been a school resource officer at Berry Middle School for the past seven years.

“There’s so much emphasis on school safety now, and I’m just so proud Hoover has stepped out in a leading way to make sure there are officers in the schools,” Brocato said.

Rector was hired as an officer in September 1989, promoted to sergeant in 1996, lieutenant in 2000 and captain in 2005. He commands the investigation bureau and serves as a public information officer.

“You can call on Gregg for anything; he’s always there,” Brocato said.