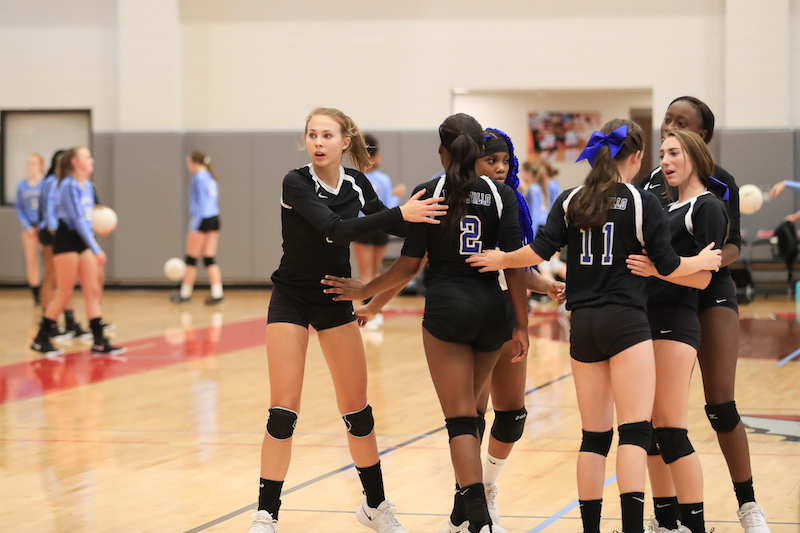 Montevallo was able to improve to 8-8 on the season and 2-0 in area play with a 3-0 sweep against Childersburg on Tuesday, Sept. 17. (For the Reporter/Dawn Harrison)

CHILDERSBURG – After a 2-5 start to the season thanks to a difficult schedule, the Montevallo Bulldogs have bounced back on the volleyball court with a 6-3 mark since then, and on Tuesday, Sept. 17, it got even better.

For the first time since their fourth game of the season, the Bulldogs were able to get back to the .500 mark on the season evening their overall record at 8-8 with a road sweep of Childersburg, but more importantly, they improved to 2-0 in area play with their second sweep in a row of an area opponent.

Montevallo entered the match having won four of its last six matches, including a sweep of area opponent Oak Grove, but was also coming off a 3-1 loss to Calera in its last outing.

The Bulldogs, however, competed close with the 6A opponent and carried that momentum over into their area match with Childersburg, which led to a dominant effort.

From the start of the match, Montevallo set the tone and controlled play throughout.

Out of the gates, the Bulldogs were able to storm in front early in the first set and continued to dominate the opening set for a 25-8 victory and a 1-0 match lead.

The second set ended up being the closest of the night, but it was still a 14-point difference. Montevallo was never threatened in the set and eventually continued to press the gas pedal, pulling away for a 25-11 set victory and a 2-0 advantage in the match.

With no momentum and now forced to win three consecutive sets to pull off the comeback, Childersburg had an extremely deep hole to climb out of and the Bulldogs weren’t going to let that happen.

The Bulldogs are now 8-8 overall and 2-0 in area play with important matchups against Indian Springs and Leeds, who is 21-3 overall and 3-0 in area play. Those matchups will likely determine their chances at a region championship or a top-two seed in the area tournament.