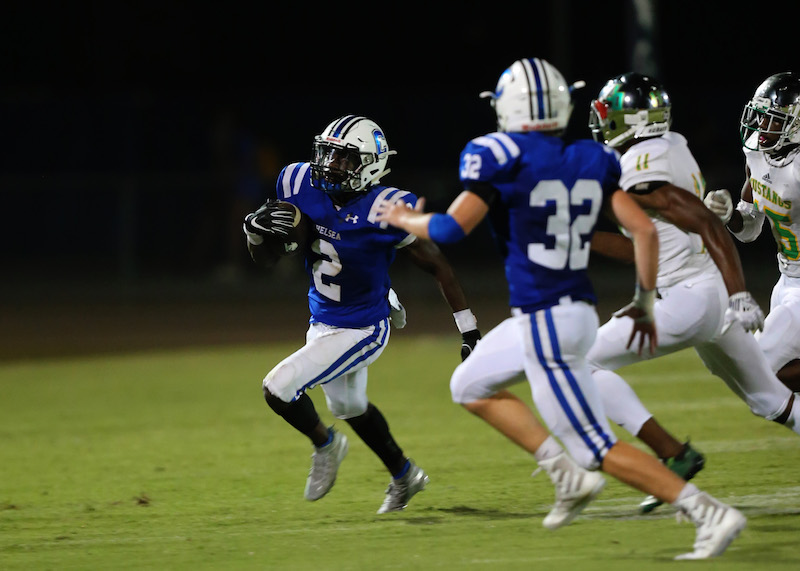 The Chelsea Hornets will put their three-game win streak to the test this week with a region road trip to county rival Pelham for this week's Game of the Week. (For the Reporter/Cari Dean)

Now through two weeks of region play, several teams are starting to separate themselves as legitimate contenders, including Chelsea, Helena, Montevallo and Thompson.

All four of those teams are still undefeated in region play and are above .500 overall.

Now we head into the fifth week of the high school football season, and teams that are hot will look to stay that way in big region matchups this Friday, while others will look to bounce back with wins during an exciting slate of games.

Pelham vs. Chelsea (Game of the Week)

These two teams come into this game in completely different situations. The Chelsea Hornets (3-1) are off to their best start since the 2016 season with three consecutive wins, including two in region play, while the Pelham Panthers have lost four consecutive games to start the season, three of which were at home.

But this is a county rivalry matchup, so you can throw everything out of the window. But when you break this game down, the Chelsea defense is playing lights out and should make the difference. Right now, the Hornets are giving up 12 points per game on that side of the ball and seem to get better each week having given up 17 in week one, 14 in week two, 10 in week three and seven in week four. That doesn’t bode well for a Pelham team that is averaging just 16.3 points per game and has yet to score more than 21 points this season.

Chelsea’s offense has been the only concern this year, which could keep Pelham in it for a while, but even the Hornets’ offense has started to take shape with a combined 74 points the last two weeks thanks to strong running from Collier Blair. Chelsea 31, Pelham 14

Spain Park is now 1-3 following a 49-35 loss to Mountain Brook and is in the midst of a three-game losing streak. The problem for the Jaguars this season has been a defense that is giving up 44 points per game, which now has to square off against a Hewitt-Trussville offense scoring 37.8 points per game. The good news is Hewitt’s defense has struggled at times too, which will allow Spain Park’s dynamic offense to keep them in it. The Huskies have also had some major injuries on the offensive side, which could make this game a lot closer than it could have been. Hewitt-Trussville 42, Spain Park 35

Oak Mountain has lost back-to-back games after its 17-0 victory against Chelsea to open the season, and the Eagles have given up 50 and 51 points in each against Hewitt-Trussville and Thompson, respectively. It doesn’t get any easier this week with a road trip to Hoover. The Bucs are 3-1 this season with their only loss by a final of 48-30 to Thompson. Hoover will be without its starting quarterback and could possibly be starting a sophomore, but Oak Mountain has to prove it can score on a physical Hoover team. Oak Mountain 14, Hoover 31

This is an important game for the Helena Huskies. With only one game left against a team with a winning record, this game could be the difference in the Huskies winning a region championship, and it will be a tough battle. Minor has won two consecutive games since back-to-back losses to start the season, and in each win, the Tigers have given up eight points or less and have yet to give up more than 21 in a game this season. Helena’s defense is also playing pretty well against top teams, which makes me think this will be a battle of which defense can make a game-changing play. I’ve been high on Helena since the summer and think the Huskies have something special going this season. If they come out of the Homewood game and play with the right focus, they should improve to 3-1 overall and 2-0 in region play. Helena 24, Minor 20

Briarwood picked up its first win under Mathew Forester last Friday with a 38-20 victory over Woodlawn to end a two-game losing skid. Now, the Lions get a tough road test against a 2-1 Wenonah team. The Dragons are coming off their first loss of the season, 16-10 to Fairfield, but also beat that same Woodlawn team 50-0. I think both of these teams are very sound defensively, but Briarwood’s offense has struggled early in the season and will have to find a way to move the ball against a Wenonah defense giving up just eight points per game. This game could go either way, but for some reason, I just have a feeling the Lions can make a play or two that will make the difference. Briarwood 17, Wenonah 14

This is a must win game for Shelby County if they want to end their playoff drought. The Wildcats are 5-0-1 all-time in this series, but this is a better Marbury team that is 2-1 on the season and beat Montevallo, a team that Shelby County lost to 56-60, 48-14 to start the season. SCHS is now 0-4 on the season, but the offense has played extremely well averaging 29.4 points per game. The defense, however, is giving up 42.8 points per game and has given up 50-plus in two of the last three. I think the Wildcats should be able to win this game if they play up to their capability, but have to see defensive improvement before picking them. Shelby County 31, Marbury 38

Vincent enters this game at 0-3 this season, while Thorsby is now 2-2. Last year, the Yellow Jackets fell 47-6, but these two teams are much closer in talent this year with the Rebels taking a step back. Both are coming off losses to LaFayette, but the Jackets have had an extra week of preparation for this game, which could make it even more interesting. I still need to see them win a game to believe, but if they can pull off this one, there are three more very winnable games that will follow. Vincent 22, Thorsby 27

This is a redemption game for the Chargers, who lost 22-21 last year. This year, they’re 0-4 and Pickens is just 1-3, which shows both teams are entering with early-season struggles. I think being at home, putting the redemption factor into the equation and just the pure want to win a game will help Cornerstone pick up their first win this Friday. Cornerstone 24, Pickens

The Evangel Lightning are coming off back-to-back wins where they scored a combined 148 points, but those were against 8-man teams. This week, the Lightning jump back into 11-man AISA play with a matchup against 4-0 Edgewood Academy. The Wildcats are giving up just 5.8 points per game so far this season, which is going to make it difficult for Evangel’s offense, despite the Lightning’s talent. Evangel 14, Edgewood 28