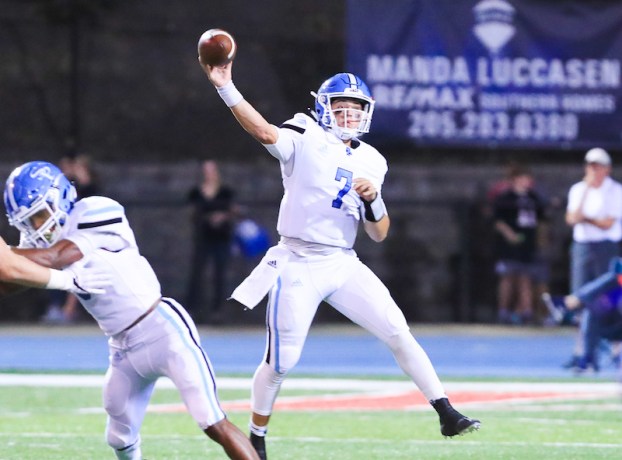 The Spain Park Jaguars got a 17-yard touchdown pass from Harrison Barker to Jaylen Ward with 14 seconds to pick up a 31-28 win over Hewitt-Trussville. (For the Reporter/Dawn Harrison)

TRUSSVILLE – After Spain Park had given up the lead for the first time in the game just three minutes earlier, Jaguars’ quarterback Harrison Barker didn’t panic with 14 seconds left in the game and his team on the Hewitt-Trussville 17-yard line needing a touchdown to win the football game.

Following a tough three-game losing streak, the Jags were in desperation mode, but determined not to lose a fourth-straight game, Barker stepped up for his team. After leading his team down the field with several big plays, including one fourth-down conversion, the Jags moved inside the Hewitt 20-yard line.

On second down, Barker took the snap, stepped calmly into a clean pocket and lofted the ball into the back-left side of the end zone toward Jaylen Ward.

Ward, who was tightly guarded by two defenders, somehow worked behind both before looking over his right shoulder to see the ball drop perfectly into his hands just inside the end zone where he tapped both feet for the game-winning touchdown.

With that touchdown, the Jags were able to overcome giving up the lead in the final three minutes to pick up the 31-28 victory and end their three-game losing streak.

Michael Callens also had a big game for the Jaguars thanks to 80 receiving yards on nine receptions and 65 rushing yards and a touchdown on 18 carries.

Spain Park got the scoring started in the first quarter on a 12-yard touchdown run from Callens to take an early 7-0 lead with 7:04 to play in the opening quarter.

Hewitt-Trussville had an early response on a 3-yard touchdown run to cap off an answering drive and tie the game 7-7 with 3:23 to play in the opening quarter.

Spain Park, however, reclaimed the lead very quickly thanks to a nice drive that was capped off by a 1-yard run from Austin Hutcheson. Leading 14-7, the Jaguars added a 39-yard field goal from Drake Tabor just before the half to take a 17-7 lead into the break.

At that point, Spain Park seemed to be in command of the game.

Out of the halftime break, neither offense was able to make much happen, but near the end of the third quarter, the Huskies got a 6-yard touchdown pass from Cade Carruth to Dazalin Worsham, which brought them to within three points at 17-14 with 3:11 to go in the quarter.

The Jaguars were able to come up with a big answer a couple of dries later when Barker hit Ward for the first big touchdown connection between the duo that made a difference in the game. That one put Spain Park on top 24-14 with 8:31 to play in the game.

That lead held up for the next few minutes, and with the Huskies down 10 points with four minutes to play and on their own 27-yard line, it looked like the Jaguars were in good shape.

But Sean Jackson then ripped off a 73-yard touchdown run that quickly changed that by cutting the Jags’ lead to 24-21 with 3:44 to play.

On the ensuing Spain Park drive, Barger hit receiver Jacob Jenkins for a 10-yard completion, but a fumble on the play after the catch was scooped up and taken to the house by Michael Edwards, which all of a sudden put Hewitt-Trussville in front 28-24 thanks to two touchdowns in less than 40 seconds.

Trailing for the first time in the game, however, Spain Park had now panic and went from its own 19-yard line down the field to score the game-winning touchdown behind big plays from Barker, Callens, Ward and others on the drive.

Spain Park is now 2-3 overall and 1-2 in region play and will now have a bye week before taking on top five teams Thompson and Hoover in consecutive weeks.

By GRAHAM BROOKS / Staff Writer BIRMINGHAM – Points were few and far between when the Briarwood Lions traveled to... read more