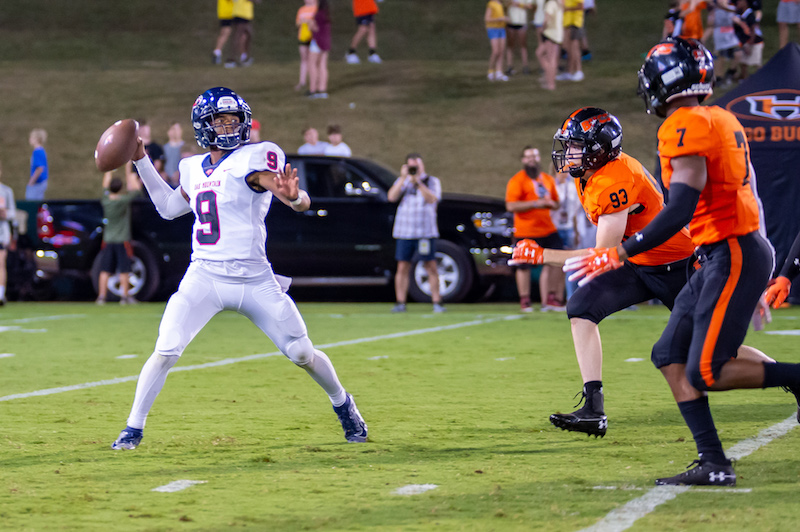 A late 99-yard touchdown pass put Oak Mountain on the board in a 37-7 loss to Hoover on Friday, Sept. 20. (For the Reporter/Larry Dancy)

The Eagles (1-3) take a break from region play next when Pelham visits on Sept. 27 and then play four more region games beginning with a visit to Mountain Brook on Oct. 3.

Before that, Hoover found a variety of ways to score.

Evan Reeder passed for three touchdowns, two to Retonio Hamilton and one to Anthony Hayes.

Hayes also rushed for a touchdown, and the Bucs also scored on a punt block by Hamilton that was recovered by Gregory Parker and a safety by Joseph Davis.

Hoover outgained OMHS 365 yards to 164, and had 18 first downs to Oak Mountain’s eight.

Two penalties hurt the Eagles, though the hosts also had their share of miscues with 10 penalties for 100 yards, compared to Oak Mountain’s single flag for five yards.

Will Pfaffman led the OMHS defense with seven tackles, including 1.5 tackles for loss, while Zach Taylor had 5.5 tackles and Chase Schwender added five tackles.