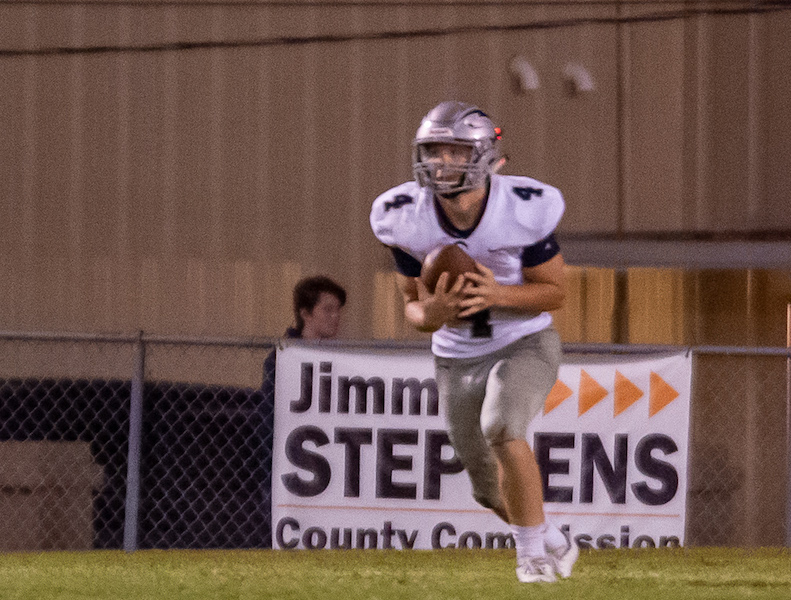 Evangel fell to AISA No. 6 Edgewood Academy on Friday, Sept. 20, in an 11-man contest. (For the Reporter/Larry Dancy)

ELMORE – Top-ranked 8-man football team Evangel Christian School returned to 11-man football Friday night, falling on the road to AISA sixth-ranked Edgewood (5-0), 53-20. It was the most points allowed by Edgewood in a win since its 2015 AISA state championship game.

“I was so proud of them, they played their butt off. We got beat 53-20, but it was not that big of a score, we just ran out of gas,” said ECS head coach Tim Smith.

The Lightning took a 6-0 lead with a 97-yard drive midway through the first quarter, capped by a 69-yard touchdown pass from Tyler Henderson to Jett Lodge. Edgewood pushed ahead 8-6 late in the first quarter and extended it to 15-6 early in the second quarter before capitalizing on a Lightning fumble and interception to score twice more in the final five minutes of the first half, 29-6.

Noah Shears added a short touchdown run in the third quarter, followed by a 2-point catch by Lodge to make it 36-14. Henderson capped the Lightning’s scoring in the fourth quarter with a fourth down QB sneak from the 1-inch line. ECS had another score called back for a penalty.

Henderson completed 20-of-37 passes for 331 yards, one touchdown and two interceptions in the win. Lodge racked up 150 yards on five catches, while Carson Hendon had 94 yards receiving on four receptions and Will Ferrell caught eight balls for 74 yards.

Shears led the ECS rushing attack with 48 yards on 14 carries.

Andrew Stafford led the defense with seven tackles, while Ferrell and Yura Gothard each had five stops.

ECS (3-2) moves to 1-2 in 11-man action after two dominating wins in 8-man the previous two weeks. Up next is another AISA road trip on Sept. 27 to Meadowview Christian in Selma.