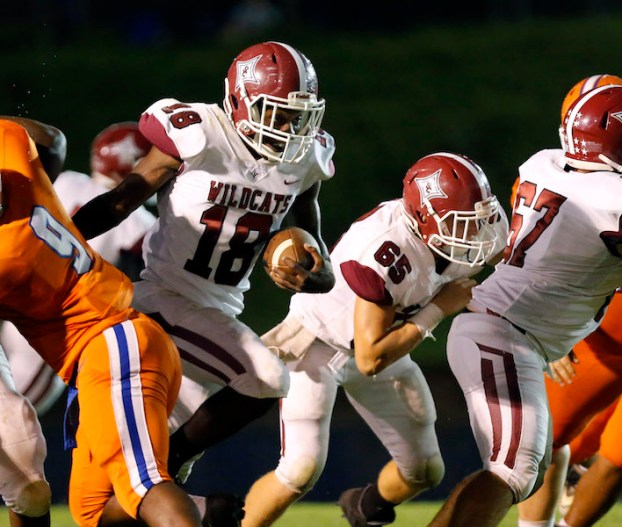 The Shelby County Wildcats dropped a tough road game to region foe Marbury on Friday, Sept. 20. (For the Reporter/Brandon Sumrall)

MARBURY – A back-and-forth night of scoring ended with Shelby County on the short side Friday, as the Marbury Bulldogs held off a late Wildcats rally on Homecoming, 43-34.

“That’s four out of five games we’ve played that’s been close and winnable ball games. We just can’t get it done,” said SCHS Coach Heath Childers. “Offensively we’ve done a pretty good job, but the defense has been really bad. That starts with me as a head coach and filters down. We’ve got to do a better job making these players understand how important their job is on defense and how important executing their game plan is.”

The Wildcats compiled 515 yards of total offense with Ray Montgomery leading the ground game with 178 yards and two touchdowns.

Tyreese Goodman got the night started with a touchdown run, 6-0, but Marbury answered, 7-6, before the end of the first quarter. Ray Montgomery regained the SCHS lead, 14-6, early in the first half, and then again, 22-14, on an Isaac Montgomery catch. Marbury tied the score, 22-22, at the break.

Goodman and Ray Montgomery each added scores in the second half. Trailing 36-34 after failing on a 2-point play, Shelby County got the ball back with around two minutes to go, but penalties and dropped passes helped force a turnover on downs.

By ALFRED KOJIMA | For the Reporter VINCENT – Junior quarterback Brody Barnett threw for two scores and ran for... read more