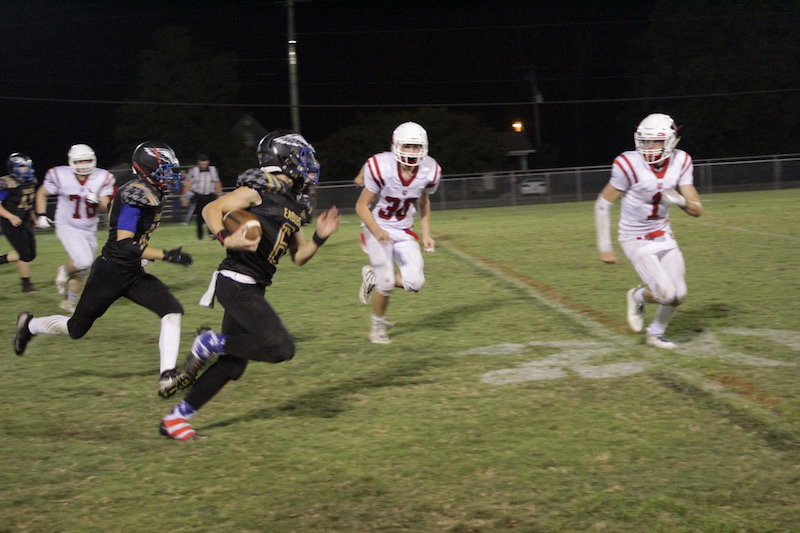 ALABASTER – The Trinity Christian Eagles hosted Coosa Valley Friday, Sept. 20, and after a tie game early, the Eagles eventually took control of the game taking a 30-8 lead into the half before holding on for a 52-30 victory in front of the home crowd.

Trinity struck first in the game behind an impressive 40-yard touchdown run from Blayton Tierce to take an early lead.

Coosa Valley responded to tie it up on the ensuing possession, but Brennan Whatley then connected with Eli Truett for a 10-yard score to quickly put the Eagles back up and this time they never looked back.

Whatley added a 30-yard run and then connected with Wesley Holsomback for a 70-yard touchdown pass to put Trinity up 30-8 going into halftime.

Constant pressure by the Trinity defensive line, including Tierce and Reese McGee kept the Rebels from developing any offensive rhythm.

The second half featured a heavy running attack to control the ball. Isaac Bradshaw and Brennan Whatley added scores, while Harrison Davis connected with Holmsomback for a 15-yard touchdown pass.

Nathan Wade capped off the scoring with a 40-yard kickoff return for a touchdown as well to lead to the final score of 52-30.

Trinity (2-3) is off next week and then hosts Lyman Ward for homecoming in two weeks. Coosa Valley (0-4) will play host to Southern Prep Academy next Friday.