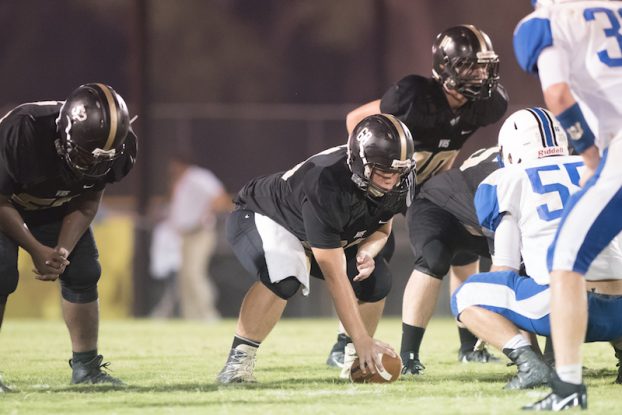 The Vincent Yellow Jackets dropped a difficult game to Thorsby on Friday, Sept. 20, that they led 14-0 at one point. (File)

VINCENT – Junior quarterback Brody Barnett threw for two scores and ran for a third score late in the fourth quarter as Thorsby defeated Vincent 28-20 in a Class 2A Region 4 game.

Vincent had an opportunity to tie the game in the closing minute. From midfield, the Yellow Jackets had three incomplete passes to force fourth down. Junior quarterback Will Harris found junior receiver Caleb Scott just past the 35-yard line for a first down. After an incomplete pass, Harris threw a ball into the end zone, but was intercepted by Rebels senior Tyler Ray with 36 seconds remaining to close out the game.

“I’m proud of our kids, how hard they played, and I’m proud of the fight,” Vincent head coach Lucas Weatherford said. “Thorsby is a god football team. We had them on the ropes and had a chance to beat them, but at the end of the day, we were making mistakes that beat us.”

Both teams battled through turnovers, with the teams combining four nine turnovers in the game, five combined turnovers (three by Thorsby, two by Vincent) in the first half.

After stopping the Yellow Jackets on a three-and-out to start the game, the Rebels first pass attempt travelled behind the line of scrimmage. Junior running back LaDonte McGregor scooped up the ball and returned the ball 46 yards for the game’s opening score. A 2-point run failed for a 6-0 lead.

In the second quarter, Vincent put together a 10-play drive that consumed five minutes. The drive ended in a 14-yard pass from Harris to McGregor with just over four minutes remaining. A successful 2-point run by senior Ryan Culliver made it 14-0.

Thorsby responded with a nine-play drive, ending with an 11-yard TD run by senior Jacob Lockhart. He then caught a 2-point attempt to trim the deficit to 14-8.

On the second play of the ensuing drive, the Yellow Jackets fumbled ball near midfield. Barnett connected with sophomore Adam Smith for a 46-yard scoring toss.  A 2-point conversion from Barnett to senior Tucker Patterson gave the Rebels a 16-14 lead at halftime.

In the third quarter, the teams each scored a touchdown. A 2-yard touchdown run by the Rebels Lockhart was countered with a 6-yard scoring pass from Harris to junior Caleb Scott to keep the margin at two (22-20).

After stopping the Yellow Jackets on downs via a quarterback sack, the Rebels closed out the scoring on a 13-yard run by Barnett.

Thorsby improves to 3-2 on the season and will host Isabella next Friday. Vincent drops to 0-4 and will travel to Winterboro next week.