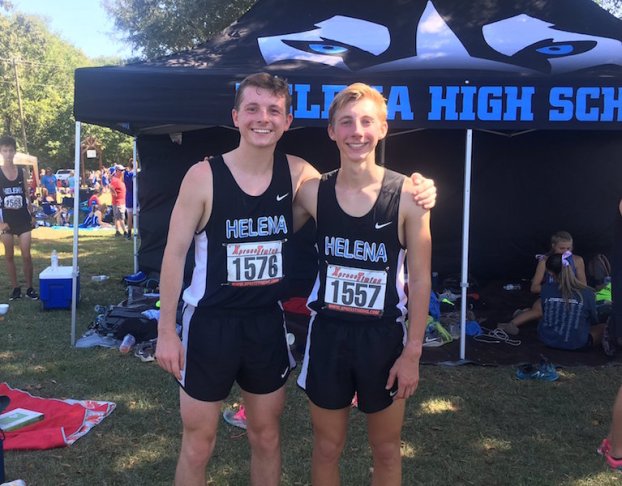 TUSCALOOSA – The Helena boys and girls cross country teams both finished on the podium at the 2019 TCBY Invitational hosted at Tuscaloosa’s Munny Sokol Park in Tuscaloosa on Saturday, Sept. 21.

The highlights of the day came from both Brady Barton and Talon Pritchard, who took the top two spots in the boys’ race.

Barton, however, stole the show and the spotlight for the day thanks to an incredible showing that saw him not just finish in first, but do so in his fastest time of the season through three races. The junior took the top spot with a time of 16:22.50, which was 40 seconds faster than his teammate in second.

So far this season, Barton has finishes of seventh, second and now first with two races run in less than 16:30.

It was also a special showing for Pritchard, who finished in a personal-record time of 17:02.57 to claim second behind Barton and pick up his highest career finish according to Milesplit.com.

Caleb Byers added a third top 10 finisher for the Huskies thanks to his finish of 10th with a time of 17:50.20, which also marked a personal record and career finish for him.

In an event that was run fast due to conditions, the records kept on coming with Edan Jamieson adding a person record himself. The junior for Helena finished 11th in the standings with a time of 17:54.87, which was just behind Byers.

With those record-setting performances, the Huskies finished second in the team standings with 38 points, which was just eight points behind powerhouse Hoover.

It was also an impressive showing for the Helena girls, who had two runners finish inside the top 10 and a total of four set personal records.

The highest finisher was Ana Waters, who continued an impressive season with a finish of seventh behind a time of 20:54.47. It marked her highest finish of the season, as she has yet to finish now lower than 21st.

Just behind Waters was teammate Madison Tsimpides, who finished eight with a personal-record time of 20:59.42. Just a sophomore, Tsimpides has yet to finish any lower than 23rd this season through three events.

Freshman Mallory Barton has also steadily improved early in the season and posted her best finish of the year with a finish of 21st thanks to a time of 23:20.60.

Helena’s final top 30 finisher was Emery Bishop, an eighth grader, who finished the race in 24:48.39, which marked a personal record in her third event.

Samantha Ranson closed out an impressive day for Helena with a finish of 44th, as the Huskies had nobody finish outside of the top 50 in either the boys or girls race. Ranson finished the event in a personal-record time of 26:36.01.