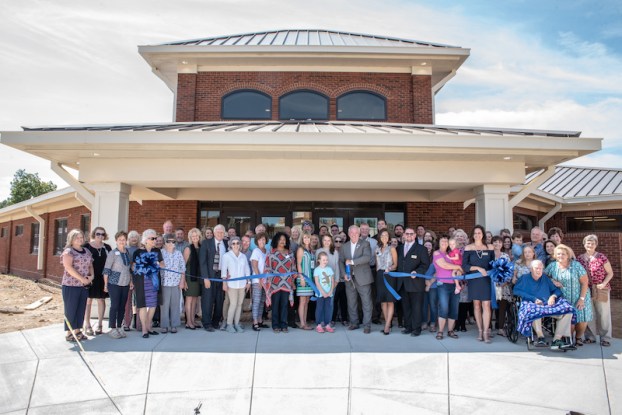 COLUMBIANA – A ribbon cutting at the new Shelby County Arts Center at Old Mill Square on Sept. 20 signified the completion of several portions of the 30,000-square-foot facility.

Dozens of people, including representatives from the Shelby County Arts Council, the city of Columbiana, Shelby County and The Shelby County Chamber, gathered in the venue’s outdoor amphitheater before proceeding inside for tours of the finished lobby, Black Box Theater and art gallery.

Andrews commended the city of Columbiana, Shelby County and the SCAC for collaborating on the project, and recognized SCAC Founder Terri Sullivan for laying the groundwork for the organization.

“Without the founding of the organization, we would not be here,” Andrews said, adding the new facility is also the product of hard work and collaboration among many people. “That’s how great things are grown.”

“Our county has been built because of the talent of our people,” Dudchock said. “Columbiana, thank you for your leadership.”

When finished, the venue will include an art creation courtyard, outdoor stage and a public park, complete with a European fountain shipped from Milan, Italy.

“The building itself is a work of art, and that’s because of our designer, Bob Enoch,” Columbiana Mayor Stancil Handley said. “This is going to be—and already is—an iconic feature in Shelby County.”

Those who attended the ribbon cutting had an opportunity to see Doug Baulos’s “Root, Branch, and Star” exhibit, the first exhibit in the EBSCO Fine Art Gallery, and listen to Jerry Robbins play the saxophone on the theater stage.

The benches inside the gallery were made by Jack Dudley, who formed the wooden tops, and Keith Lawler, who did the metalwork.

Andrews said a grand opening event will be held after the facility and grounds are completed.

For updates on the progress of the project, or for more information about the SCAC, visit Shelbycountyartscouncil.com.

Will combo pill catch on in US to prevent heart attacks?

By CARLA K. JOHNSON / Associated Press A cheap, daily pill that combines four drugs has been tested for the... read more