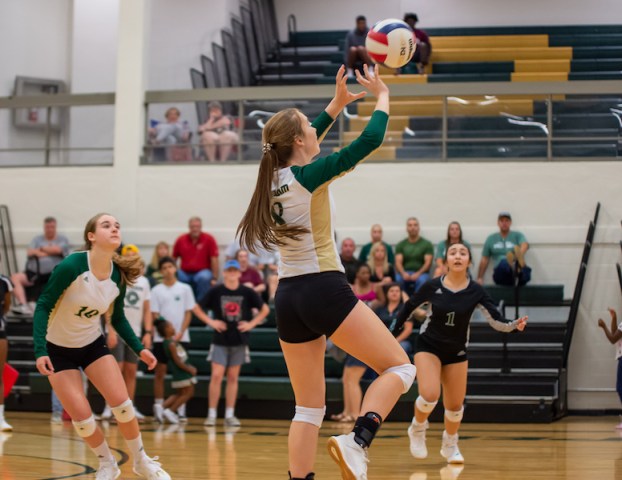 The Pelham volleyball team remained perfect in area play on Monday, Sept. 23, with a sweep of the Calera Eagles to improve to 17-6 overall this season. (File)

Pelham remains unbeaten in area play with win against Calera

PELHAM – The Pelham Panthers padded their lead in the Class 6A, Area 8 standings with a tough, but well-earned victory over the scrappy Calera Eagles Monday, Sept 23.

The first set was closer than the stat sheet indicated as the two teams went back and forth in the early going and were tied 10-10.

Sophomore middle hitter Elizabeth Hayhurst was particularly dominant from then on as Pelham went on a 15-2 run to close out the set. Hayhurst was unstoppable at the net reeling off several kills, while also blocking a couple of Eagles’ hits for points as well.

“Elizabeth does a great job for us, I thought her and both setters connected well,” said Pelham head coach Perry Robinson. “That connection is something we work on daily so obviously today it showed out and did nice for us.”

Calera inched much closer as the match wore on. The Eagles took the early lead and held it until the middle of the second set. However, with the two teams tied at 17 apiece, Pelham took over again.

The Panthers went on an 8-3 run the rest of the way as Hayhurst and senior outside hitter Erin Long bombed the Eagles’ front line with Kennedy Chambers also getting a few licks in.

The Panthers jumped out to an 8-4 lead in the final set, but Calera battled back tying the game at 10 and then 12. Pelham went up four again, but the Eagles were undeterred and tied the game once again at 20-20.

Long was brilliant again with six kills as the Panthers slowly inched out the win at home.

After the game, Robinson said his team would continue to stick to the basics in practice as the postseason approaches.

“Serving and passing, we struggled in both of those areas,” Robinson said. “We need to continue working on connection with hitters, the defensive stuff we need to work on, just tweaks here and there for different players and teams coming up.”

Pelham will host Tuscaloosa County Thursday, Sept 26 at 6 p.m. and then resume area play next Tuesday, Oct 1 as they welcome the Helena Huskies. Calera will travel to McAdory for a tri-match that includes Mortimer Jordan Thursday, Sept 26 starting at 5 p.m.